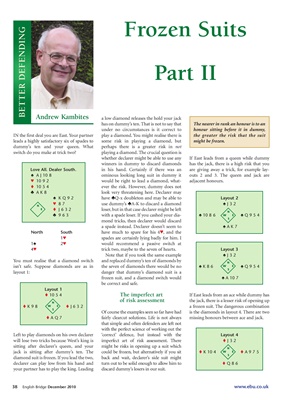 Andrew Kambites a low diamond releases the hold your jack

has on dummy’s ten. That is not to say that The nearer in rank an honour is to an

under no circumstances is it correct to honour sitting before it in dummy,

IN the first deal you are East. Your partner play a diamond. You might realise there is the greater the risk that the suit

leads a highly satisfactory six of spades to some risk in playing a diamond, but might be frozen.

dummy’s ten and your queen. What perhaps there is a greater risk in not

switch do you make at trick two? playing a diamond. The crucial question is

winners in dummy to discard diamonds has the jack, there is a high risk that you

Love All. Dealer South. in his hand. Certainly if there was an are giving away a trick, for example lay-

E t J632 loser, but in that case declarer might be left N

mond tricks, then declarer would discard

a spade instead. Declarer doesn’t seem to ´AK7

North South have much to spare for his 4™, and the

1™ spades are certainly lying badly for him. I

1´ 2™ would recommend a passive switch at

4™ trick two, maybe to the seven of hearts. Layout 3

Note that if you took the same example ´J32

isn’t safe. Suppose diamonds are as in the seven of diamonds there would be no ´K86 W E ´Q954

layout 1: danger that dummy’s diamond suit is a

be correct and safe.

of risk assessment the jack, there is a lesser risk of opening up

Of course the examples seen so far have had is the diamonds in layout 4. There are two

that simple and often defenders are left not

with the perfect science of working out the

Left to play diamonds on his own declarer ‘correct’ defence, but instead with the Layout 4

will lose two tricks because West’s king is imperfect art of risk assessment. There tJ32

sitting after declarer’s queen, and your might be risks in opening up a suit which N

jack is sitting after dummy’s ten. The could be frozen, but alternatively if you sit t K 10 4 W E tA975

diamond suit is frozen. If you lead the two, back and wait, declarer’s side suit might

your partner has to play the king. Leading discard dummy’s losers in our suit.