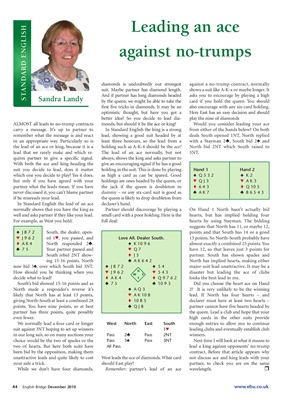 diamonds is undoubtedly our strongest against a no-trump contract, normally

suit. Maybe partner has diamond length. shows a suit like A-K-x or maybe longer. It

Sandra Landy by the queen, we might be able to take the card if you hold the queen. You should

first five tricks in diamonds. It may be an also encourage with any six-card holding.

optimistic thought, but have you got a Here East has an easy decision and should

better idea? So you decide to lead dia- play the nine of diamonds

ALMOST all leads to no-trump contracts monds, but should it be the ace or king? Would you consider leading your ace

carry a message. It’s up to partner to In Standard English the king is a strong from either of the hands below? On both

remember what the message is and react lead, showing a good suit headed by at deals South opened 1NT, North replied

in an appropriate way. Particularly so is least three honours, so the lead from a with a Stayman 2®, South bid 2´ and

the lead of an ace or king, because it is a holding such as A-K-4 should be the ace! North bid 2NT which South raised to

lead that we rarely make and which re- The lead of an ace normally, but not 3NT.

quires partner to give a specific signal. always, shows the king and asks partner to

suit you decide to lead, does it matter holding in the suit. This is done by playing Hand 1 Hand 2

but only if you have agreed with your holdings are ones headed by the queen, or ™ QJ3 ™ AK3

if he misreads your lead. the queen is likely to drop doubleton from

In Standard English the lead of an ace declarer’s hand.

well and asks partner if they like your lead. small card with a poor holding. Here is the hearts, but has implied holding four

For example, as West you hold: full deal: hearts by using Stayman. The bidding

™ 543 disaster but leading the ace of clubs

North made a responder’s reverse it’s ´ AQ3 2? It is very unlikely to be the winning

points. You have nine points, so at best ® QJ8 partner cannot have five hearts headed by

partner has three points, quite possibly the queen. Lead a club and hope that your

even fewer. high cards in the other suits provide

in our long suit, so on many auctions your Pass 2® Pass 2NT winners.

two of hearts. But here both suits have All Pass lead a king against opponents’ no-trump

been bid by the opposition, making them contract. Before that article appears why

unattractive leads and quite likely to cost West leads the ace of diamonds. What card not discuss ace and king leads with your

your side a trick. should East play? partner, to check you are on the same

While we don’t have four diamonds, Remember: partner’s lead of an ace wavelength. r