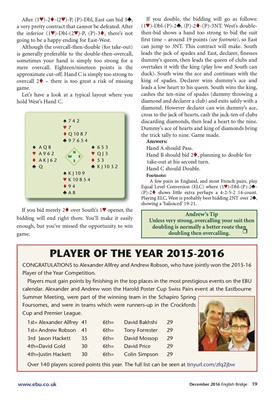 a very pretty contract that cannot be defeated. After

going to be a happy ending for East-West.

Although the overcall-then-double (for take-out)

is generally preferable to the double-then-overcall,

sometimes your hand is simply too strong for a

mere overcall. Eighteen/nineteen points is the

approximate cut-off. Hand C is simply too strong to

overcall 2t - there is too great a risk of missing

Let's have a look at a typical layout where you

Hand A should Pass.

Hand B should bid 2t, planning to double for

take-out at his second turn.

A few pairs in England, and most French pairs, play

If you bid merely 2t over South's 1™ opener, the

bidding will end right there. You'll make it easily

enough, but you've missed the opportunity to win

Unless very strong, overcalling your suit then

doubling is normally a better route than

CONGRATULATIONS to Alexander Allfrey and Andrew Robson, who have jointly won the 2015-16

Player of the Year Competition.

Summer Meeting, were part of the winning team in the Schapiro Spring

Foursomes, and were in teams which were runners-up in the Crockfords

Over 140 players scored points this year. The full list can be seen at tinyurl.com/zfq2jbw

If you double, the bidding will go as follows:

shows a hand too strong to bid the suit

can jump to 3NT. This contract will make. South

leads the jack of spades and East, declarer, finesses

dummy's queen, then leads the queen of clubs and

overtakes it with the king (play low and South can

duck). South wins the ace and continues with the

leads a low heart to his queen. South wins the king,

cashes the ten-nine of spades (dummy throwing a

diamond and declarer a club) and exits safely with a

cross to the jack of hearts, cash the jack-ten of clubs

discarding diamonds, then lead a heart to the nine.

Dummy's ace of hearts and king of diamonds bring

the trick tally to nine. Game made.