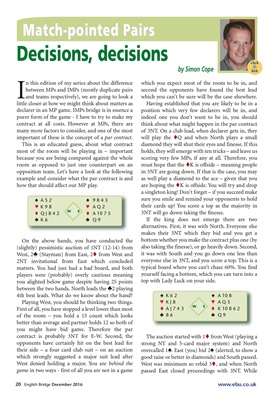 n this edition of my series about the difference

and teams respectively), we are going to look a

little closer at how we might think about matters as

declarer in an MP game. IMPs bridge is in essence a

contract at all costs. However at MPs, there are

many more factors to consider, and one of the most

important of these is the concept of a par contract.

This is an educated guess, about what contract

most of the room will be playing in - important

because you are being compared against the whole

room as opposed to just one counterpart on an

opposition team. Let's have a look at the following

example and consider what the par contract is and

how that should affect our MP play.

which you expect most of the room to be in, and

second the opponents have found the best lead

which you can't be sure will be the case elsewhere.

Having established that you are likely to be in a

position which very few declarers will be in, and

indeed one you don't want to be in, you should

think about what might happen in the par contract

of 3NT. On a club lead, when declarer gets in, they

will play the tQ and when North plays a small

diamond they will shut their eyes and finesse. If this

holds, they will emerge with ten tricks - and leave us

scoring very few MPs, if any at all. Therefore, you

must hope that the tK is offside - meaning people

in 3NT are going down. If that is the case, you may

as well play a diamond to the ace - given that you

are hoping the tK is offside. You will try and drop

a singleton king! Don't forget - if you succeed make

sure you smile and remind your opponents to hold

their cards up! You score a top as the majority in

3NT will go down taking the finesse.

If the king does not emerge there are two

alternatives. First, it was with North. Everyone else

makes their 3NT which they bid and you get a

bottom whether you make the contract plus one (by

also taking the finesse), or go heavily down. Second,

it was with South and you go down one less than

everyone else in 3NT, and you score a top. This is a

typical board where you can't chase 60%. You find

yourself facing a bottom, which you can turn into a

top with Lady Luck on your side.

On the above hands, you have conducted the

2NT invitational from East which concluded

matters. You had just had a bad board, and both

you alighted below game despite having 25 points

between the two hands. North leads the ®2 playing

4th best leads. What do we know about the hand?

Playing West, you should be thinking two things.

First of all, you have stopped a level lower than most

of the room - you hold a 13 count which looks

better than average and partner holds 12 so both of

contract is probably 3NT for E-W. Second, the

opponents have certainly hit on the best lead for

their side - a four card club suit - on an auction

which strongly suggested a major suit lead after

West denied holding a major. You are behind the

The auction started with 1t from West (playing a

good raise or better in diamonds) and South passed.

West was minimum so rebid 3t, and when North