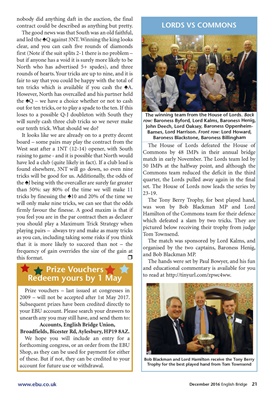 nobody did anything daft in the auction, the final

contract could be described as anything but pretty.

The good news was that South was an old faithful,

and led the ´Q against 3NT. Winning the king looks

clear, and you can cash five rounds of diamonds

North who has advertised 5+ spades), and three

rounds of hearts. Your tricks are up to nine, and it is

ten tricks which is available if you cash the ´A.

However, North has overcalled and his partner held

the ´Q - we have a choice whether or not to cash

out for ten tricks, or to play a spade to the ten. If this

loses to a possible Q-J doubleton with South they

will surely cash three club tricks so we never make

our tenth trick. What should we do?

It looks like we are already on to a pretty decent

board - some pairs may play the contract from the

raising to game - and it is possible that North would

have led a club (quite likely in fact). If a club lead is

found elsewhere, 3NT will go down, so even nine

tricks will be good for us. Additionally, the odds of

the ´J being with the overcaller are surely far greater

will only make nine tricks, we can see that the odds

firmly favour the finesse. A good maxim is that if

you feel you are in the par contract then as declarer

you should play a Maximum Trick Strategy when

playing pairs - always try and make as many tricks

as you can, including taking some risks if you think

that it is more likely to succeed than not - the

frequency of gain overrides the size of the gain at

The winning team from the House of Lords. Back

Trophy for the best played hand from Tom Townsend

Commons by 48 IMPs in their annual bridge

match in early November. The Lords team led by

50 IMPs at the halfway point, and although the

Commons team reduced the deficit in the third

quarter, the Lords pulled away again in the final

set. The House of Lords now leads the series by

was won by Bob Blackman MP and Lord

Hamilton of the Commons team for their defence

which defeated a slam by two tricks. They are

pictured below receiving their trophy from judge

The match was sponsored by Lord Kalms, and

The hands were set by Paul Bowyer, and his fun

and educational commentary is available for you

Subsequent prizes have been credited directly to

unearth any you may still have, and send them to:

We hope you will include an entry for a

forthcoming congress, or an order from the EBU

Shop, as they can be used for payment for either

of these. But if not, they can be credited to your

Redeem yours by 1 May