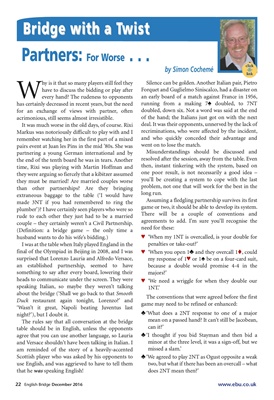 Partners: For Worse . . . by Simon Cochemé

hy is it that so many players still feel they

have to discuss the bidding or play after

every hand? The rudeness to opponents

has certainly decreased in recent years, but the need

for an exchange of views with partner, often

It was much worse in the old days, of course. Rixi

Markus was notoriously difficult to play with and I

remember watching her in the first part of a mixed

pairs event at Juan les Pins in the mid '80s. She was

partnering a young German international and by

the end of the tenth board he was in tears. Another

time, Rixi was playing with Martin Hoffman and

they were arguing so fiercely that a kibitzer assumed

they must be married! Are married couples worse

than other partnerships? Are they bringing

extraneous baggage to the table ('I would have

made 3NT if you had remembered to ring the

plumber')? I have certainly seen players who were so

rude to each other they just had to be a married

(Definition: a bridge game - the only time a

husband wants to do his wife's bidding.)

I was at the table when Italy played England in the

final of the Olympiad in Beijing in 2008, and I was

an established partnership, seemed to have

something to say after every board, lowering their

heads to communicate under the screen. They were

about the bridge ('Shall we go back to that Smooth

The rules say that all conversation at the bridge

table should be in English, unless the opponents

agree that you can use another language, so Lauria

and Versace shouldn't have been talking in Italian. I

am reminded of the story of a heavily-accented

Scottish player who was asked by his opponents to

use English, and was aggrieved to have to tell them

that he was speaking English!

Silence can be golden. Another Italian pair, Pietro

Forquet and Guglielmo Siniscalco, had a disaster on

an early board of a match against France in 1956,

running from a making 7´ doubled, to 7NT

doubled, down six. Not a word was said at the end

of the hand; the Italians just got on with the next

deal. It was their opponents, unnerved by the lack of

recriminations, who were affected by the incident,

and who quickly conceded their advantage and

went on to lose the match.

Misunderstandings should be discussed and

resolved after the session, away from the table. Even

then, instant tinkering with the system, based on

one poor result, is not necessarily a good idea -

you'll be creating a system to cope with the last

problem, not one that will work for the best in the

game or two, it should be able to develop its system.

There will be a couple of conventions and

agreements to add. I'm sure you'll recognise the

™ 'When my 1NT is overcalled, is your double for

because a double would promise 4-4 in the

™ 'We need a wriggle for when they double our

The conventions that were agreed before the first

game may need to be refined or enhanced:

®'What does a 2NT response to one of a major

mean on a passed hand? It can't still be Jacobean,

®'I thought if you bid Stayman and then bid a

minor at the three level, it was a sign-off, but we

®'We agreed to play 2NT as Ogust opposite a weak

two, but what if there has been an overcall - what

does 2NT mean then?'