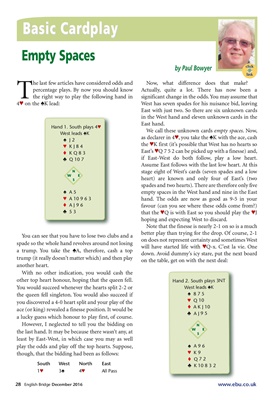 he last few articles have considered odds and

percentage plays. By now you should know

the right way to play the following hand in

Now, what difference does that make?

Actually, quite a lot. There has now been a

significant change in the odds. You may assume that

West has seven spades for his nuisance bid, leaving

East with just two. So there are six unknown cards

in the West hand and eleven unknown cards in the

the ™K first (it's possible that West has no hearts so

if East-West do both follow, play a low heart.

Assume East follows with the last low heart. At this

stage eight of West's cards (seven spades and a low

heart) are known and only four of East's (two

spades and two hearts). There are therefore only five

empty spaces in the West hand and nine in the East

favour (can you see where these odds come from?)

hoping and expecting West to discard.

better play than trying for the drop. Of course, 2-1

on does not represent certainty and sometimes West

will have started life with ™Q-x. C'est la vie. One

down. Avoid dummy's icy stare, put the next board

on the table, get on with the next deal:

spade so the whole hand revolves around not losing

a trump. You take the ´A, therefore, cash a top

trump (it really doesn't matter which) and then play

With no other indication, you would cash the

other top heart honour, hoping that the queen fell.

You would succeed whenever the hearts split 2-2 or

the queen fell singleton. You would also succeed if

ace (or king) revealed a finesse position. It would be

a lucky guess which honour to play first, of course.

However, I neglected to tell you the bidding on

the last hand. It may be because there wasn't any, at

least by East-West, in which case you may as well

play the odds and play off the top hearts. Suppose,

though, that the bidding had been as follows: