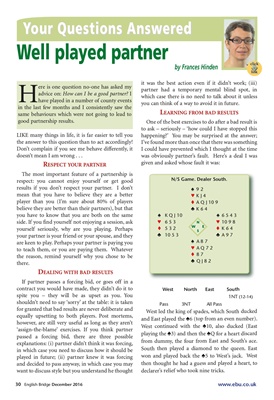 LIKE many things in life, it is far easier to tell you

the answer to this question than to act accordingly!

Don't complain if you see me behave differently, it

The most important feature of a partnership is

respect: you cannot enjoy yourself or get good

results if you don't respect your partner. I don't

mean that you have to believe they are a better

player than you (I'm sure about 80% of players

believe they are better than their partners), but that

you have to know that you are both on the same

side. If you find yourself not enjoying a session, ask

yourself seriously, why are you playing. Perhaps

your partner is your friend or your spouse, and they

are keen to play. Perhaps your partner is paying you

to teach them, or you are paying them. Whatever

the reason, remind yourself why you chose to be

If partner passes a forcing bid, or goes off in a

contract you would have made, they didn't do it to

spite you - they will be as upset as you. You

shouldn't need to say 'sorry' at the table: it is taken

for granted that bad results are never deliberate and

however, are still very useful as long as they aren't

'assign-the-blame' exercises. If you think partner

passed a forcing bid, there are three possible

explanations: (i) partner didn't think it was forcing,

in which case you need to discuss how it should be

played in future; (ii) partner knew it was forcing

and decided to pass anyway, in which case you may

want to discuss style but you understand he thought

it was the best action even if it didn't work; (iii)

partner had a temporary mental blind spot, in

which case there is no need to talk about it unless

you can think of a way to avoid it in future.

to ask - seriously - 'how could I have stopped this

happening?' You may be surprised at the answer;

I've found more than once that there was something

I could have prevented which I thought at the time

was obviously partner's fault. Here's a deal I was

given and asked whose fault it was:

ere is one question no-one has asked my

advice on: How can I be a good partner? I

have played in a number of county events

in the last few months and I consistently saw the

same behaviours which were not going to lead to

West led the king of spades, which South ducked

and East played the ´6 (top from an even number).

playing the ´3) and then the ´Q for a heart discard

from dummy, the four from East and South's ace.

South then played a diamond to the queen. East

won and played back the ´5 to West's jack. West

then thought he had a guess and played a heart, to