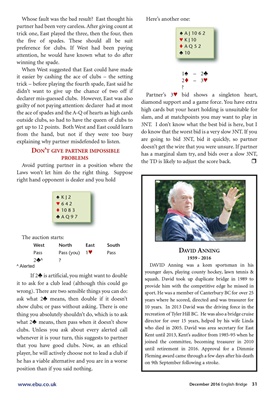 DAVID Anning was a keen sportsman in his

squash. David took up duplicate bridge in 1989 to

provide him with the competitive edge he missed in

sport. He was a member of Canterbury BC for over 25

years where he scored, directed and was treasurer for

recreation of Tyler Hill BC. He was also a bridge cruise

director for over 15 years, helped by his wife Linda

who died in 2005. David was area secretary for East

joined the committee, becoming treasurer in 2010

until retirement in 2016. Approval for a Dimmie

Fleming award came through a few days after his death

on 9th September following a stroke.

Whose fault was the bad result? East thought his

partner had been very careless. After giving count at

trick one, East played the three, then the four, then

the five of spades. These should all be suit

preference for clubs. If West had been paying

attention, he would have known what to do after

When West suggested that East could have made

it easier by cashing the ace of clubs - the setting

trick - before playing the fourth spade, East said he

didn't want to give up the chance of two off if

guilty of not paying attention: declarer had at most

outside clubs, so had to have the queen of clubs to

get up to 12 points. Both West and East could learn

from the hand, but not if they were too busy

explaining why partner misdefended to listen.

Avoid putting partner in a position where the

Laws won't let him do the right thing. Suppose

right hand opponent is dealer and you hold

diamond support and a game force. You have extra

high cards but your heart holding is unsuitable for

slam, and at matchpoints you may want to play in

3NT. I don't know what the best bid is here, but I

do know that the worst bid is a very slow 3NT. If you

are going to bid 3NT, bid it quickly, so partner

doesn't get the wire that you were unsure. If partner

has a marginal slam try, and bids over a slow 3NT,

the TD is likely to adjust the score back. r

it to ask for a club lead (although this could go

wrong). There are two sensible things you can do:

ask what 2® means, then double if it doesn't

show clubs; or pass without asking. There is one

thing you absolutely shouldn't do, which is to ask

what 2® means, then pass when it doesn't show

clubs. Unless you ask about every alerted call

whenever it is your turn, this suggests to partner

that you have good clubs. Now, as an ethical

player, he will actively choose not to lead a club if

he has a viable alternative and you are in a worse

position than if you said nothing.