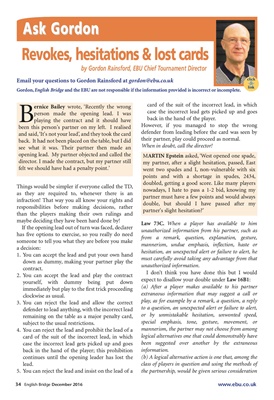 Things would be simpler if everyone called the TD,

as they are required to, whenever there is an

infraction! That way you all know your rights and

responsibilities before making decisions, rather

than the players making their own rulings and

maybe deciding they have been hard done by!

If the opening lead out of turn was faced, declarer

has five options to exercise, so you really do need

someone to tell you what they are before you make

1. You can accept the lead and put your own hand

down as dummy, making your partner play the

2. You can accept the lead and play the contract

yourself, with dummy being put down

immediately but play to the first trick proceeding

3. You can reject the lead and allow the correct

defender to lead anything, with the incorrect lead

remaining on the table as a major penalty card,

subject to the usual restrictions.

4. You can reject the lead and prohibit the lead of a

card of the suit of the incorrect lead, in which

case the incorrect lead gets picked up and goes

back in the hand of the player; this prohibition

continues until the opening leader has lost the

5. You can reject the lead and insist on the lead of a

card of the suit of the incorrect lead, in which

case the incorrect lead gets picked up and goes

back in the hand of the player.

However, if you managed to stop the wrong

defender from leading before the card was seen by

their partner, play could proceed as normal.

When in doubt, call the director!

Gordon, English Bridge and the EBU are not responsible if the information provided is incorrect or incomplete.

person made the opening lead. I was

playing the contract and it should have

been this person's partner on my left. I realised

and said, 'It's not your lead', and they took the card

back. It had not been placed on the table, but I did

see what it was. Their partner then made an

opening lead. My partner objected and called the

director. I made the contract, but my partner still

felt we should have had a penalty point.'

my partner, after a slight hesitation, passed, East

went two spades and I, non-vulnerable with six

partner must have a few points and would always

double, but should I have passed after my

Law 73C. When a player has available to him

unauthorized information from his partner, such as

from a remark, question, explanation, gesture,

hesitation, an unexpected alert or failure to alert, he

must carefully avoid taking any advantage from that

I don't think you have done this but I would

expect to disallow your double under Law 16B1:

(a) After a player makes available to his partner

extraneous information that may suggest a call or

play, as for example by a remark, a question, a reply

to a question, an unexpected alert or failure to alert,

or by unmistakable hesitation, unwonted speed,

mannerism, the partner may not choose from among

logical alternatives one that could demonstrably have

been suggested over another by the extraneous

(b) A logical alternative action is one that, among the

class of players in question and using the methods of

the partnership, would be given serious consideration