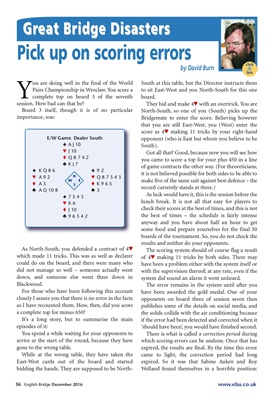 ou are doing well in the final of the World

Pairs Championship in Wroclaw. You score a

complete top on board 3 of the seventh

session. How bad can that be?

Board 3 itself, though it is of no particular

South at this table, but the Director instructs them

to sit East-West and you North-South for this one

They bid and make 4™ with an overtrick. You are

North-South, so one of you (South) picks up the

Bridgemate to enter the score. Believing however

that you are still East-West, you (West) enter the

score as 4™ making 11 tricks by your right-hand

opponent (who is East but whom you believe to be

Got all that? Good, because now you will see how

of game contracts the other way. (For theoreticians,

make five of the same suit against best defence - the

As luck would have it, this is the session before the

lunch break. It is not all that easy for players to

check their scores at the best of times, and this is not

the best of times - the schedule is fairly intense

anyway and you have about half an hour to get

some food and prepare yourselves for the final 30

boards of the tournament. So, you do not check the

results and neither do your opponents.

The scoring system should of course flag a result

of 4™ making 11 tricks by both sides. There may

have been a problem either with the system itself or

with the supervision thereof; at any rate, even if the

system did sound an alarm it went unheard.

The error remains in the system until after you

have been awarded the gold medal. One of your

opponents on board three of session seven then

publishes some of the details on social media, and

the solids collide with the air conditioning because

if the error had been detected and corrected when it

'should have been', you would have finished second.

There is what is called a correction period during

which scoring errors can be undone. Once that has

expired, the results are final. By the time this error

came to light, the correction period had long

expired. So it was that Sabine Auken and Roy

Welland found themselves in a horrible position:

As North-South, you defended a contract of 4™

which made 11 tricks. This was as well as declarer

could do on the board, and there were many who

did not manage so well - someone actually went

down, and someone else went three down in

as I have recounted them. How, then, did you score

It's a long story, but to summarise the main

You spend a while waiting for your opponents to

arrive at the start of the round, because they have

gone to the wrong table.

While at the wrong table, they have taken the

East-West cards out of the board and started

bidding the hands. They are supposed to be North-