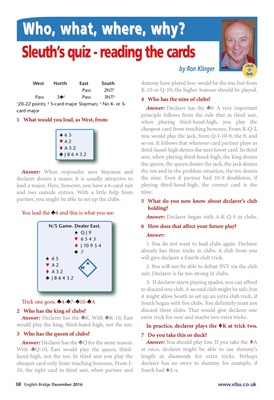 dummy have played low, would be the ten, but from

4 Who has the nine of clubs?

Answer: Declarer has the ®9. A very important

principle follows from the rule that in third seat,

when playing third-hand-high, you play the

so on. It follows that whatever card partner plays as

third-hand-high denies the next lower card. In third

the queen, the queen denies the jack, the jack denies

the ten and in the problem situation, the ten denies

the nine. Even if partner had 10-9 doubleton, if

playing third-hand-high, the correct card is the

5 What do you now know about declarer's club

6 How does that affect your future play?

1. You do not want to lead clubs again. Declarer

already has three tricks in clubs. A club from you

will give declarer a fourth club trick.

2. You will not be able to defeat 3NT via the club

suit. Declarer is far too strong in clubs.

3. If declarer starts playing spades, you can afford

to discard one club. A second club might be safe, but

it might allow South to set up an extra club trick, if

South began with five clubs. You definitely must not

discard three clubs. That would give declarer one

In practice, declarer plays the tK at trick two.

7 Do you take this or duck?

Answer: You should play low. If you take the tA

at once, declarer might be able to use dummy's

declarer has no entry to dummy, for example, if

1 What would you lead, as West, from:

Answer: When responder uses Stayman and

declarer denies a major, it is usually attractive to

lead a major. Here, however, you have a 6-card suit

and two outside entries. With a little help from

partner, you might be able to set up the clubs.

You lead the ®4 and this is what you see:

2 Who has the king of clubs?

would play the king, third-hand-high, not the ten.

3 Who has the queen of clubs?

Answer: Declarer has the ®Q for the same reason.

With ®Q-10, East would play the queen, thirdhand-high,

not the ten. In third seat you play the

cheaper card only from touching honours. From J10,

the right card in third seat, when partner and