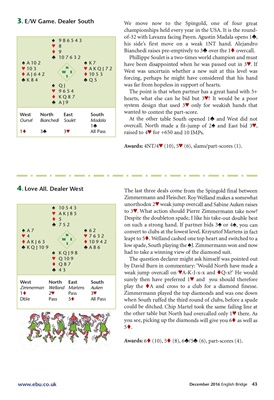 4.Love All. Dealer West The last three deals come from the Spingold final between

to 3™. What action should Pierre Zimmermann take now?

Despite the doubleton spade, I like his take-out double best

convert to clubs at the lowest level. Krzysztof Martens in fact

leapt to 5t. Welland cashed one top heart and switched to a

had to take a winning view of the diamond suit.

The question declarer might ask himself was pointed out

by David Burn in commentary: 'Would North have made a

surely then have preferred 1™ and you should therefore

play the tA and cross to a club for a diamond finesse.

Zimmermann played the top diamonds and was one down

when South ruffed the third round of clubs, before a spade

could be ditched. Chip Martel took the same failing line at

the other table but North had overcalled only 1™ there. As

you see, picking up the diamonds will give you 6t as well as

3.E/W Game. Dealer South We move now to the Spingold, one of four great

championships held every year in the USA. It is the roundof-32

his side's first move on a weak 1NT hand. Alejandro

Bianchedi raises pre-emptively to 3® over the 1t overcall.

Phillippe Soulet is a two-times world champion and must

have been disappointed when he was passed out in 3™. If

West was uncertain whether a new suit at this level was

forcing, perhaps he might have considered that his hand

was far from hopeless in support of hearts.

hearts, what else can he bid but 3™? It would be a poor

system design that used 3™ only for weakish hands that

wanted to contest the part-score.

At the other table South opened 1® and West did not