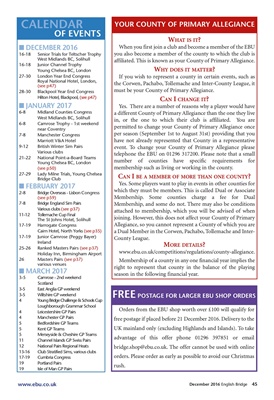 Orders from the EBU shop worth over £100 will qualify for

free postage if placed before 21 December 2016. Delivery to the

UK mainland only (excluding Highlands and Islbridge.shop@ebu.co.ukadvantage of this offer phone 01296 397851 or email

bridge.shop@ebu.co.uk. The offer cannot be used with online

orders. Please order as early as possible to avoid our Christmas

affiliated. This is known as your County of Primary Allegiance.

WHY DOES IT MATTER?

If you wish to represent a county in certain events, such as

the Corwen, Pachabo, Tollemache and Inter-County League, it

must be your County of Primary Allegiance.

CAN I CHANGE IT?

Yes. There are a number of reasons why a player would have

a different County of Primary Allegiance than the one they live

in, or the one to which their club is affiliated. You are

permitted to change your County of Primary Allegiance once

per season (September 1st to August 31st) providing that you

have not already represented that County in a representative

event. To change your County of Primary Allegiance please

number of counties have specific requirements for

membership such as living or working in the county.

CAN I BE A MEMBER OF MORE THAN ONE COUNTY?

Yes. Some players want to play in events in other counties for

which they must be members. This is called Dual or Associate

Membership. Some counties charge a fee for Dual

Membership, and some do not. There may also be conditions

attached to membership, which you will be advised of when

joining. However, this does not affect your County of Primary

Allegiance, so you cannot represent a County of which you are

a Dual Member in the Corwen, Pachabo, Tollemache and InterCounty

Membership of a county in any one financial year implies the

right to represent that county in the balance of the playing

season in the following financial year.

YOUR COUNTY OF PRIMARY ALLEGIANCE