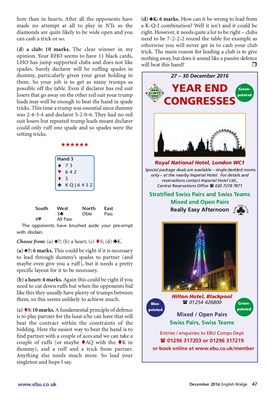 here than in hearts. After all the opponents have

made no attempt at all to play in NTs so the

diamonds are quite likely to be wide open and you

can cash a trick or so.

opinion. Your RHO seems to have 11 black cards,

LHO has jump supported clubs and does not like

spades. Surely declarer will be ruffing spades in

dummy, particularly given your great holding in

them. So your job is to get as many trumps as

possible off the table. Even if declarer has red suit

losers that go away on the other red suit your trump

leads may well be enough to beat the hand in spade

tricks. This time a trump was essential since dummy

could only ruff one spade and so spades were the

The opponents have brushed aside your pre-empt

to lead through dummy's spades to partner (and

maybe even give you a ruff), but it needs a pretty

specific layout for it to be necessary.

(b) a heart: 4 marks. Again this could be right if you

need to cut down ruffs but when the opponents bid

like this they usually have plenty of trumps between

them, so this seems unlikely to achieve much.

beat the contract within the constraints of the

bidding. Here the easiest way to beat the hand is to

couple of ruffs (or maybe tAQ with the tK in

dummy), and a ruff and a trick from partner.

Anything else needs much more. So lead your

singleton and hope I say.

a K-Q-J combination? Well it isn't and it could be

right. However, it needs quite a lot to be right - clubs

otherwise you will never get in to cash your club

trick. The main reason for leading a club is to give

nothing away, but does it sound like a passive defence

will beat this hand? r

only - at the nearby Imperial Hotel. For details and

or book online at www.ebu.co.uk/member