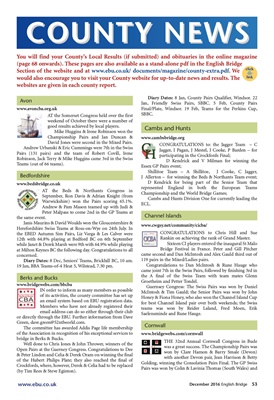 AT the Somerset Congress held over the first

weekend of October there were a number of

David Jones were second in the Mixed Pairs.

Andrew Urbanski & Eric Cummings were 7th in the Swiss

Pairs (131 pairs) and the team of Robert Covill, Irene

AT the Beds & Northants Congress in

Peter Malpass to come 2nd in the GP Teams at

Herefordshire Swiss Teams at Ross-on-Wye on 24th July. In

while Janet & Derek Marsh were 9th with 64.9% while playing

at Milton Keynes BC the following day. Congratulations to all

www.bridgewebs.codave.green@52ntlworld.comr to inform as many members as possible

of its activities, the county committee has set up

an email system based on EBU registration data.

Members who have not already registered their

email address can do so either through their club

or directly through the EBU. Further information from Dave

of the Association in recognition of his exceptional services to

Well done to Chris Jones & John Thrower, winners of the

Open Pairs at the Guerney Congress. Congratulations to Dee

& Peter Lindon and Celia & Derek Oram on winning the final

of the Hubert Philips Plate; they also reached the final of

Crockfords, where, however, Derek & Celia had to be replaced

CONGRATULATIONS to: the Jagger Team -C

participating in the Crockfords Final;

D Kendrick and V Milman for winning the

D Kendrick for being part of the Senior Team that

represented England in both the European Teams

Championship and the World Bridge Games;

Cambs and Hunts Division One for currently leading the

CONGRATULATIONS to Chris Hill and Sue

Rankin on achieving the rank of Grand Master.

came second and Dan McIntosh and Alex Gauld third out of

119 pairs in the Mixed/Ladies pairs.

came joint 7th in the Swiss Pairs, followed by finishing 3rd in

the A final of the Swiss Team with team mates Glenn

Guernsey Congress: The Swiss Pairs was won by Daniel

McIntosh & Tim Gauld; the Senior Pairs was won by John

for best Channel Island pair over both weekends; the Swiss

was a great success. The Championship Pairs was

Pairs was won by Colin & Lavinia Thomas (South Wales) and

(page 68 onwards). These pages are also available as a stand-alone pdf in the English Bridge

would also encourage you to visit your County website for up-to-date news and results. The

websites are given in each county report.