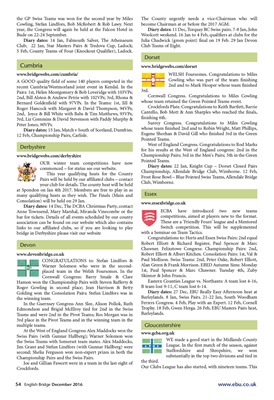 year, the Congress will again be held at the Falcon Hotel in

A GOOD quality field of some 140 players competed in the

recent Cumbria/Westmorland joint event in Kendal. In the

Bernard Goldenfield with 97VPs. In the Teams: 1st, Jill &

OUR winter team competitions have now

This year qualifying heats for the County

Pairs will be held by our affiliated clubs - contact

your club for details. The county heat will be held

many qualifying heats as they wish. The Finals (Main and

Consolation) will be held on 29 Jan.

bar for tickets. Details of all events scheduled by our county

association can be found on our website which also contains

links to our affiliated clubs, so if you are looking to play

Warner Solomon who were in the secondplaced

team in the Welsh Foursomes. In the

Golding won the Consolation Pairs; Stefan Lindfors was in

Edmondson and Brigid McElroy tied for 2nd in the Swiss

Teams and were 2nd in the Pivot Teams; Ros Morgan was in

At the West of England Congress Alex Maddocks won the

Jim Grant and Stefan Lindfors (with Gunnar Hallberg) were

second; Shelia Ferguson won non-expert prizes in both the

Championship Pairs and the Swiss Pairs.

The County urgently needs a vice-Chairman who will

become Chairman at or before the 2017 AGM.

Woolcott weekend. 16 Jan to 4 Feb, qualifiers at clubs for the

Cowling who was part of the team finishing

2nd and to Mark Hooper whose team finished

whose team finished 2nd and to Robin Wright, Matt Phillips,

Eugene Sheehan & David Gill who finished 3rd in the Green

for his results at the West of England congress: 2nd in the

Championship Pairs; 3rd in the Men's Pairs; 5th in the Green

competitions, aimed at players new to the format.

These are a 'Friendly Fours' league and a Mentored

Switch competition. This will be supplemented

with a Seminar on Team Tactics.

WE made a good start in the Midlands County

League. In the first match of the season, against

Staffordshire and Shropshire, we won

substantially in the top two divisions and tied in

Our Clubs League has also started, with nineteen teams. This