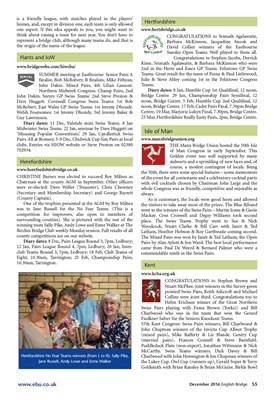 is a friendly league, with matches played in the players'

homes, and, except in division one, each team is only allowed

one expert. If this idea appeals to you, you might want to

think about raising a team for next year. You don't have to

represent a bridge club, although many teams do, and that is

the origin of the name of the league.

clubs. Entries via HIOW website or Steve Preston on 02380

CHRISTINE Barnes was elected to succeed Roy Milnes as

Chairman at the county AGM in September. Other officers

One of the trophies presented at the AGM by Roy Milnes

was to Jane Russell for the No Fear Teams. (This is a

competition for improvers, also open to members of

surrounding counties). She is pictured with the rest of the

David Collier winners of the Eastbourne

Sunday Open Teams. Well played to them all.

Teams. Great result for the team of Fiona & Paul Littlewood,

of Man Congress in early September. This

Golden event was well supported by many

stalwarts and a sprinkling of new faces and, of

course, a modest contingent of locals. Being

the 50th, there were some special features - some mementoes

of the event for all contestants and a celebratory cocktail party

with evil cocktails chosen by Chairman John Large and the

whole Congress was as friendly, competitive and enjoyable as

As is customary, the locals were good hosts and allowed

the visitors to take away most of the prizes. The Blue Riband

went to the winners of the Swiss Pairs - Martin Jones & Gavin

The Mixed Pairs was won by Janet & Ted Latham; the Open

came from Paul De Weerd & Bernard Palmer who were a

commendable ninth in the Swiss Pairs.

CONGRATULATIONS to Stephen Brown and

Collins were joint third. Congratulations too to

Charlwood who was in the team that won the Gerard