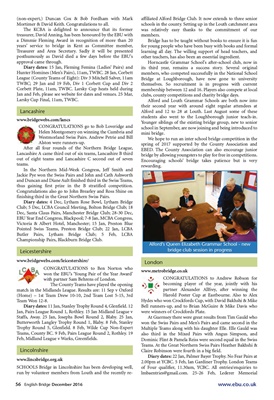 Mortimer & David Keith. Congratulations to all.

The KCBA is delighted to announce that its former

treasurer, David Anning, has been honoured by the EBU with

a Dimmie Fleming Award in recognition of more than 20

years' service to bridge in Kent as Committee member,

Treasurer and Area Secretary. Sadly it will be presented

posthumously as David died a few days before the EBU's

CONGRATULATIONS go to Bob Loveridge and

Helen Montgomery on winning the Cumbria and

After all four rounds of the Northern Bridge League,

Lancashire A came third out of six teams, Lancashire B third

out of eight teams and Lancashire C second out of seven

In the Northern Mid-Week Congress, Jeff Smith and

and Duncan and Diane Ault finished third in the Swiss Teams,

thus gaining first prize in the B stratified competition.

Congratulations also go to John Brearley and Ross Shine on

CONGRATULATIONS to Ben Norton who

won the EBU's 'Young Pair of the Year Award'

with partner Sam Behrens of London.

The County Teams have played the opening

match in the Midlands League. Results are: 11 Sep v Oxford

SCHOOLS Bridge in Lincolnshire has been developing well,

run by volunteer members from Louth and the recently reaffiliated

schools in the county. Setting up in the Louth catchment area

was relatively easy thanks to the commitment of our

for young people who have been busy with books and formal

learning all day. The willing support of head teachers, and

other teachers, has also been an essential ingredient.

members, who competed successfully in the National School

Bridge at Loughborough, have now gone to university

themselves. So recruitment is in progress with current

membership between 12 and 16. Players also compete at local

Alford and Louth Grammar Schools are both now into

their second year with around eight regular attendees at

Alford and 12 to 28 at Louth. Last August some of these

Younger siblings of the existing bridge group, new to senior

school in September, are now joining and being introduced to

We hope to run an inter school bridge competition in the

spring of 2017 supported by the County Association and

bridge by allowing youngsters to play for free in competitions.

CONGRATULATIONS to Andrew Robson for

becoming player of the year, jointly with his

partner Alexander Allfrey, after winning the

Bell runners-up, and to Brian McGuire & Mike Davis who

were winners of Crockfords Plate.

At Guernsey there were great results from Tim Gauld who

also third in the Mixed Pairs with Angus Simpson, and

Dominic Flint & Pamela Reiss were second equal in the Swiss

Claire Robinson were fourth in a big field.