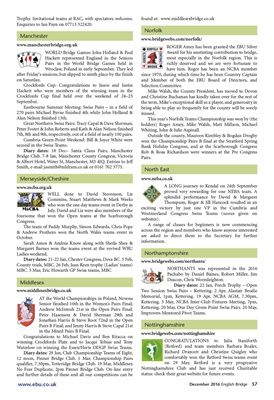 Hackett represented England in the Seniors

Pairs in the World Bridge Games held in

after Friday's sessions, but slipped to ninth place by the finish

Hackett who were members of the winning team in the

Crockfords Cup final held over the weekend of 24-25

Eastbourne Summer Meeting: Swiss Pairs - in a field of

second in the Swiss Teams.

who won the one day teams event in Derby in

July. David and Liz were also members of the

foursome that won the Open teams at the Scarborough

Margaret Barnes won the teams event at the revived WBU

AT the World Championships in Poland, Nevena

in the Mixed Pairs B Final.

Congratulations to Michael Davis and Ben Ritacca on

winning Crockfords Plate and to Jacqui Tobias and Tony

and further details of these and all our competitions can be

ROGER Amey has been granted the EBU Silver

Award for his unstinting contribution to bridge,

most especially in the Norfolk region. This is

richly deserved and we are very fortunate to

have him. Roger has been an NCBA member

since 1970, during which time he has been Country Captain

and Member of both the EBU Board of Directors, and

Mike Walsh, the County President, has moved to Devon

and Christine Buchanan has kindly taken over for the rest of

the term. Mike's exceptional skill as a player, and generosity in

This year's Norfolk Teams Championship was won by (the

won the Championship Pairs B final at the Stratford Spring

Bank Holiday Congress, and at the Scarborough Congress

Rob & Rosa Richardson were winners at the Pre Congress

A LONG journey to Kendal on 24th September

proved very rewarding for one NEBA team. A

exciting victory by just one VP in the Cumbria and

A range of classes for beginners is now commencing

across the region and members who know anyone interested

are asked to direct them to the Secretary for further

NORTHANTS was represented in the 2016

Richard Draycott and Christine Quigley who

on 29 May. Retford is a very progressive