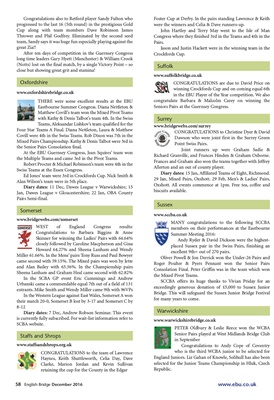 progressed to the last 16 (5th round) in the prestigious Gold

Thrower and Phil Godfrey. Eliminated by the second seed

team, Sandy says it was huge fun especially playing against the

After ten days of competition in the Guernsey Congress

(Notts) lost on the final match, by a single Victory Point - so

THERE were some excellent results at the EBU

with Kathy & Denis Talbot's team 4th. In the Swiss

Covill were 4th in the Swiss Teams. Rob Dixon was 7th in the

the Multiple Teams and came 3rd in the Pivot Teams.

Robert Procter & Michael Robinson's team were 4th in the

Swiss Teams at the Essex Congress.

Skinner for winning the Ladies' Pairs with 64.64%

Howard 64.27% and Sheena Lanham and Wendy

came second with 59.15%. The Mixed pairs was won by Jette

and Alan Bailey with 63.36%. In the Championship pairs

In the SCBA GP event Eric Cummings and Andrew

In the Western League against East Wales, Somerset A won

is currently fully subscribed. For wait-list information refer to

CONGRATULATIONS to the team of Lawrence

retaining the cup for the County in the Edgar

Foster Cup at Derby. In the pairs standing Lawrence & Keith

were the winners and Celia & Dave runners-up.

John Hartley and Terry May went to the Isle of Man

Jason and Justin Hackett were in the winning team in the

CONGRATULATIONS are due to David Price on

in the EBU Player of the Year competition. We also

Seniors Pairs at the Guernsey Congress.

Dawson who were joint first in the Surrey Green

Joint runners up were Graham Sadie &

Frances and Graham also won the teams together with Jeffrey

Allerton and an out of county player.

Oxshott. All events commence at 1pm. Free tea, coffee and

MANY congratulations to the following SCCBA

members on their performances at the Eastbourne

Sussex pair in the Swiss Pairs, finishing an

Oliver Powell & Jon Derrick won the Under-26 Pairs and

Consolation Final. Peter Griffin was in the team which won

SCCBA offers its huge thanks to Vivian Priday for an

Bridge. This will safeguard the Sussex Junior Bridge Festival

for many years to come.

Congratulations to Andy Cope of Coventry

who is the third WCBA junior to be selected for

England Juniors. Liz Gahan of Knowle, Solihull has also been

selected for the Junior Teams Championship in Hluk, Czech