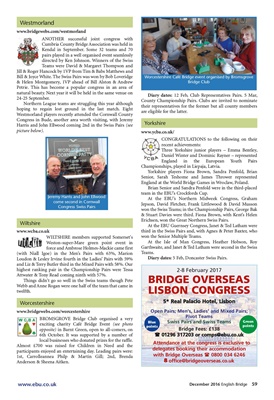 ANOTHER successful joint congress with

Kendal in September. Some 32 teams and 70

directed by Ken Johnson. Winners of the Swiss

Teams were David & Margaret Thompson and

Jill & Roger Hancock by 1VP from Tim & Babs Matthews and

Petrie. This has become a popular congress in an area of

natural beauty. Next year it will be held in the same venue on

Northern League teams are struggling this year although

hoping to regain lost ground in the last match. Eight

Congress in Bude, another area worth visiting, with Jeremy

Loudon & Lesley Irvine fourth in the Ladies' Pairs with 59%

and Liz & Terry Butler third in the Mixed Pairs with 58%. Our

highest ranking pair in the Championship Pairs were Tessa

Things didn't go so well in the Swiss teams though Pete

opposite) in Barnt Green, open to all-comers, on

6th October. It was supported by a number of

local businesses who donated prizes for the raffle.

Almost £700 was raised for Children in Need and the

their representatives for the former but all county members

are eligible for the latter.

CONGRATULATIONS to the following on their

England in the European Youth Pairs

England at the World Bridge Games in Wroclaw, Poland.

Brian Senior and Sandra Penfold were in the third-placed

team in the EBU's Crockfords Cup.

won the Swiss Teams; in the Championship Pairs, George Bak

At the EBU Guernsey Congress, Janet & Ted Latham were

third in the Swiss Pairs and, with Agnes & Peter Baxter, who

At the Isle of Man Congress, Heather Hobson, Roy

Garthwaite, and Janet & Ted Latham were second in the Swiss

Attendance at the congress is exclusive to