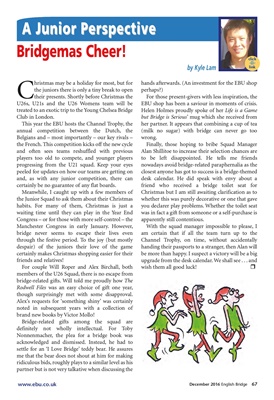 hristmas may be a holiday for most, but for

the juniors there is only a tiny break to open

their presents. Shortly before Christmas the

treated to an exotic trip to the Young Chelsea Bridge

This year the EBU hosts the Channel Trophy, the

annual competition between the Dutch, the

Belgians and - most importantly - our key rivals -

the French. This competition kicks off the new cycle

players too old to compete, and younger players

progressing from the U21 squad. Keep your eyes

peeled for updates on how our teams are getting on

and, as with any junior competition, there can

certainly be no guarantee of any flat boards.

Meanwhile, I caught up with a few members of

the Junior Squad to ask them about their Christmas

habits. For many of them, Christmas is just a

waiting time until they can play in the Year End

Congress - or for those with more self-control - the

Manchester Congress in early January. However,

bridge never seems to escape their lives even

through the festive period. To the joy (but mostly

despair) of the juniors their love of the game

For couple Will Roper and Alex Birchall, both

members of the U26 Squad, there is no escape from

bridge-related gifts. Will told me proudly how The

Rodwell Files was an easy choice of gift one year,

though surprisingly met with some disapproval.

Alex's requests for 'something shiny' was certainly

noted in subsequent years with a collection of

Bridge-related gifts among the squad are

definitely not wholly intellectual. For Toby

Nonnenmacher, the plea for a bridge book was

acknowledged and dismissed. Instead, he had to

settle for an 'I Love Bridge' teddy bear. He assures

me that the bear does not shout at him for making

ridiculous bids, roughly plays to a similar level as his

partner but is not very talkative when discussing the

hands afterwards. (An investment for the EBU shop

For those present-givers with less inspiration, the

EBU shop has been a saviour in moments of crisis.

Helen Holmes proudly spoke of her Life is a Game

but Bridge is Serious' mug which she received from

her partner. It appears that combining a cup of tea

(milk no sugar) with bridge can never go too

Alan Shillitoe to increase their selection chances are

to be left disappointed. He tells me friends

nowadays avoid bridge-related paraphernalia as the

closest anyone has got to success is a bridge-themed

desk calendar. He did speak with envy about a

friend who received a bridge toilet seat for

Christmas but I am still awaiting clarification as to

whether this was purely decorative or one that gave

you declarer play problems. Whether the toilet seat

With the squad manager impossible to please, I

am certain that if all the team turn up to the

Channel Trophy, on time, without accidentally

handing their passports to a stranger, then Alan will

be more than happy. I suspect a victory will be a big

upgrade from the desk calendar. We shall see . . . and

wish them all good luck! r