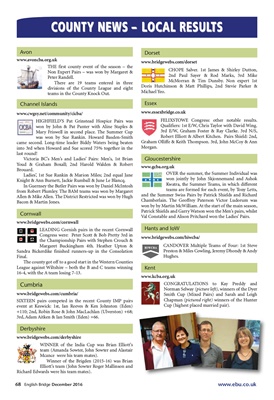 THE first county event of the season - the

There are 19 teams entered in three

divisions of the County League and eight

teams in the County Knock Out.

into 3rd when Howard and Sue scored 75% together in the

In Guernsey the Butler Pairs was won by Daniel McIntosh

from Robert Plumley. The BAM teams was won by Margaret

Allen & Mike Allen. The District Restricted was won by Hugh

the Championship Pairs with Stephen Crouch &

League against Wiltshire - both the B and C teams winning

WINNER of the India Cup was Brian Elliott's

Mcance were his team mates).

Richard Edwards were his team mates).

OVER the summer, the Summer Individual was

Kwatra, the Summer Teams, in which different

teams are formed for each event, by Tony Letts,

and the Summer Swiss Pairs by Patrick Shields and Richard

won by by Martin McWilliam. At the start of the main season,

Patrick Shields and Garry Watson won the Men's pairs, whilst

CONGRATULATIONS to Kay Preddy and