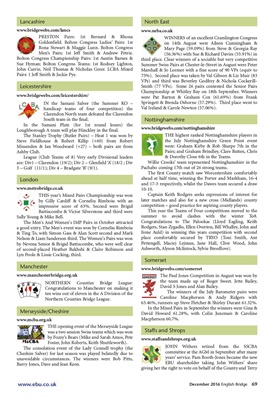 IN the Samani Salver (the Summer KO -

handicap teams of four competition) the

South team in the final.

In the Samani Plate (for 1st round losers) the

Loughborough A team will play Hinckley in the final.

The Stanley Trophy (Butler Pairs) - Heat 1 was won by

by Gilly Cardiff & Corneliu Rimboiu with an

impressive score of 63%. Second were Brigid

Battiscombe & Victor Silverstone and third were

The Men's And Women's IMP Pairs in October attracted

a good entry. The Men's event was won by Corneliu Rimboiu

& Ting To, with Simon Gass & Alan Scott second and Mark

by Nevena Senior & Brigid Battiscombe, who were well clear

Congratulations to Manchester on making it

ten wins out of eleven in the A Division of the

THE opening event of the Merseyside League

was a two session Swiss teams which was won

The consolation event of the Lady Connell trophy (the

Cheshire Salver) for last season was played belatedly due to

WINNERS of an excellent Cramlington Congress

on 14th August were Aileen Cunningham &

third place. Clear winners of a sociable but very competitive

Summer Swiss Pairs at Chester-le-Street in August were Peter

THE highest ranked Nottinghamshire players in

were: Graham Kirby & Rob Sharpe 7th in the

& Dorothy Close 6th in the Teams.

ahead at half time, winning the Porter and Markham, 16-4

and 17-3 respectively, whilst the Dawes team secured a draw

later matches and also for a new cross (Midlands) county

This year the Teams of Four competitions moved to the

summer to avoid clashes with the winter To8.

Irene Auld) in winning this years competition with second

The Paul Jones Competition in August was won by

the team made up of Roger Sweet. Jette Bailey,

The winners of the July Barometer pairs were

In the Mixed Pairs in September the winners were Gina &

JOHN Withers retired from the SSCBA

committee at the AGM in September after many