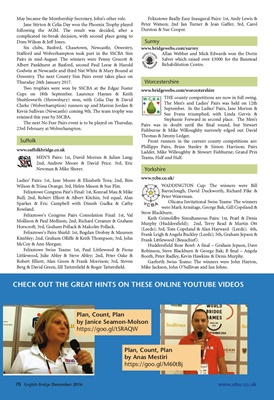 May became the Membership Secretary, John's other role.

following the AGM. The result was decided, after a

Stafford and Wolverhampton took part in the SSCBA Sim

Pairs in mid-August. The winners were Penny Grocott &

Godwin at Newcastle and third Nat White & Mary Bound at

Oswestry. The next County Sim Pairs event takes place on

Two trophies were won by SSCBA at the Edgar Foster

retained this year by SSCBA.

The next No Fear Pairs event is to be played on Thursday,

Salver which raised over £3000 for the Banstead

THE county competitions are now in full swing.

The Men's and Ladies' Pairs was held on 12th

Pairs was in doubt until the final round, but Stewart

Front runners in the current county competitions are:

Teams, Half and Half.

WADDINGTON Cup: The winners were Bill

CHECK OUT THE GREAT HINTS ON THESE ONLINE YOUTUBE VIDEOS