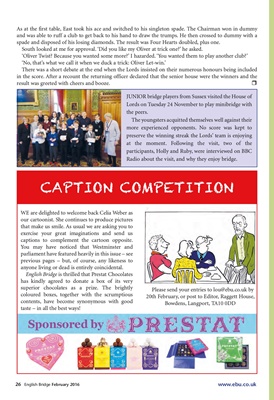 WE are delighted to welcome back Celia Weber as

our cartoonist. She continues to produce pictures

that make us smile. As usual we are asking you to

exercise your great imaginations and send us

captions to complement the cartoon opposite.

You may have noticed that Westminster and

parliament have featured heavily in this issue - see

previous pages - but, of course, any likeness to

anyone living or dead is entirely coincidental.

has kindly agreed to donate a box of its very

superior chocolates as a prize. The brightly

coloured boxes, together with the scrumptious

contents, have become synonymous with good

taste - in all the best ways!

As at the first table, East took his ace and switched to his singleton spade. The Chairman won in dummy

and was able to ruff a club to get back to his hand to draw the trumps. He then crossed to dummy with a

spade and disposed of his losing diamonds. The result was Four Hearts doubled, plus one.

South looked at me for approval. 'Did you like my Oliver at trick one?' he asked.

'Oliver Twist? Because you wanted some more?' I hazarded. 'You wanted them to play another club?'

'No, that's what we call it when we duck a trick: Oliver Let-win.'

in the score. After a recount the returning officer declared that the senior house were the winners and the

result was greeted with cheers and booze. r

Please send your entries to lou@ebu.co.uk by

JUNIOR bridge players from Sussex visited the House of

Lords on Tuesday 24 November to play minibridge with

The youngsters acquitted themselves well against their

more experienced opponents. No score was kept to

preserve the winning streak the Lords' team is enjoying

at the moment. Following the visit, two of the

participants, Holly and Ruby, were interviewed on BBC

Radio about the visit, and why they enjoy bridge.