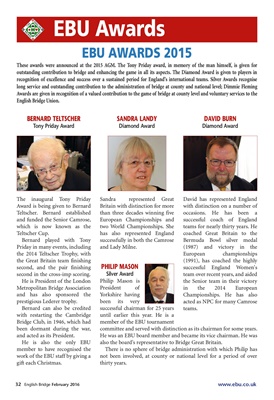 Award is being given to Bernard

and funded the Senior Camrose,

which is now known as the

Priday in many events, including

second, and the pair finishing

second in the cross-imp scoring.

He is President of the London

and has also sponsored the

Bernard can also be credited

with restarting the Cambridge

been dormant during the war,

and acted as its President.

He is also the only EBU

member to have recognised the

work of the EBU staff by giving a

with distinction on a number of

occasions. He has been a

teams for nearly thirty years. He

coached Great Britain to the

team over recent years, and aided

the Senior team in their victory

Championships. He has also

acted as NPC for many Camrose

Britain with distinction for more

successfully in both the Camrose

These awards were announced at the 2015 AGM. The Tony Priday award, in memory of the man himself, is given for

outstanding contribution to bridge and enhancing the game in all its aspects. The Diamond Award is given to players in

recognition of excellence and success over a sustained period for England's international teams. Silver Awards recognise

long service and outstanding contribution to the administration of bridge at county and national level; Dimmie Fleming

until earlier this year. He is a

member of the EBU tournament

committee and served with distinction as its chairman for some years.

He was an EBU board member and became its vice chairman. He was

There is no sphere of bridge administration with which Philip has

not been involved, at county or national level for a period of over