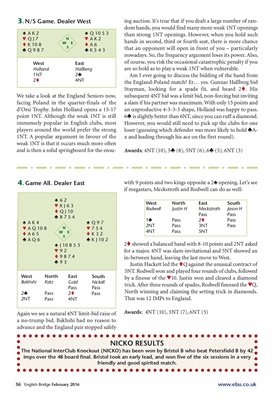 ing auction. It's true that if you dealt a large number of random

hands, you would find many more weak 1NT openings

than strong 1NT openings. However, when you hold such

hands in second, third or fourth seat, there is more chance

that an opponent will open in front of you - particularly

nowadays. So, the frequency argument loses its power. Also,

of course, you risk the occasional catastrophic penalty if you

are so bold as to play a weak 1NT when vulnerable.

Stayman, looking for a spade fit, and heard 2t. His

subsequent 4NT bid was a limit bid, non-forcing but inviting

a slam if his partner was maximum. With only 15 points and

an unproductive 4-3-3-3 shape, Holland was happy to pass.

6® is slightly better than 6NT, since you can ruff a diamond.

However, you would still need to pick up the clubs for one

loser (guessing which defender was more likely to hold ®Ax

and leading through his ace on the first round).

We take a look at the England Seniors now,

facing Poland in the quarter-finals of the

point 1NT. Although the weak 1NT is still

immensely popular in English clubs, most

players around the world prefer the strong

1NT. A popular argument in favour of the

weak 1NT is that it occurs much more often

and is then a solid springboard for the ensu4.game

All. Dealer East with 9 points and two kings opposite a 2® opening. Let's see

if megastars, Meckstroth and Rodwell can do as well:

for a major. 4NT was slam-invitational and 5NT showed an

Justin Hackett led the tQ against the unusual contract of

by a finesse of the ™10. Justin won and cleared a diamond

trick. After three rounds of spades, Rodwell finessed the ™Q,

North winning and claiming the setting trick in diamonds.

That was 12 IMPs to England.

Again we see a natural 4NT limit-bid raise of

a no-trump bid. Bakhshi had no reason to

imps over the 48 board inal. Bristol took an early lead, and won ive of the six sessions in a very