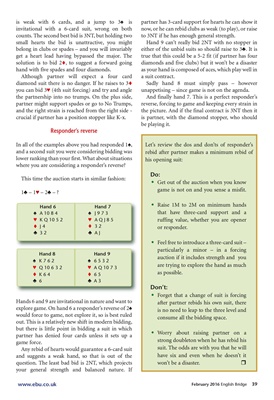 invitational with a 6-card suit, wrong on both

counts. The second best bid is 3NT, but holding two

belong in clubs or spades - and you will invariably

get a heart lead having bypassed the major. The

solution is to bid 2t, to suggest a forward going

Although partner will expect a four card

diamond suit there is no danger. If he raises to 3t

you can bid 3™ (4th suit forcing) and try and angle

the partnership into no trumps. On the plus side,

partner might support spades or go to No Trumps,

In all of the examples above you had responded 1´,

and a second suit you were considering bidding was

lower ranking than your first. What about situations

where you are considering a responder's reverse?

This time the auction starts in similar fashion:

Hands 6 and 9 are invitational in nature and want to

explore game. On hand 6 a responder's reverse of 2´

would force to game, not explore it, so is best ruled

out. This is a relatively new shift in modern bidding,

but there is little point in bidding a suit in which

partner has denied four cards unless it sets up a

Any rebid of hearts would guarantee a 6-card suit

and suggests a weak hand, so that is out of the

question. The least bad bid is 2NT, which projects

your general strength and balanced nature. If

partner has 3-card support for hearts he can show it

now, or he can rebid clubs as weak (to play), or raise

to 3NT if he has enough general strength.

Hand 9 can't really bid 2NT with no stopper in

either of the unbid suits so should raise to 3®. It is

diamonds and five clubs) but it won't be a disaster

as your hand is composed of aces, which play well in

Sadly hand 8 must simply pass - however

unappetising - since game is not on the agenda.

And finally hand 7. This is a perfect responder's

reverse, forcing to game and keeping every strain in

the picture. And if the final contract is 3NT then it

is partner, with the diamond stopper, who should

Let's review the dos and don'ts of responder's

rebid after partner makes a minimum rebid of

• Get out of the auction when you know

game is not on and you sense a misfit.

that have three-card support and a

ruffing value, whether you are opener

particularly a minor - in a forcing

auction if it includes strength and you

are trying to explore the hand as much

• Forget that a change of suit is forcing

after partner rebids his own suit, there

is no need to leap to the three level and

consume all the bidding space.

• Worry about raising partner on a

strong doubleton when he has rebid his

suit. The odds are with you that he will

have six and even when he doesn't it

won't be a disaster. r