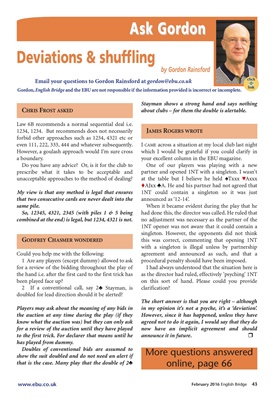 However, a goulash approach would I'm sure cross

Do you have any advice? Or, is it for the club to

prescribe what it takes to be acceptable and

unacceptable approaches to the method of dealing?

My view is that any method is legal that ensures

that two consecutive cards are never dealt into the

Could you help me with the following:

1 Are any players (except dummy) allowed to ask

for a review of the bidding throughout the play of

the hand i.e. after the first card to the first trick has

been played face up?

2 If a conventional call, say 2® Stayman, is

doubled for lead direction should it be alerted?

Players may ask about the meaning of any bids in

the auction at any time during the play (if they

know what the auction was) but they can only ask

for a review of the auction until they have played

to the first trick. For declarer that means until he

has played from dummy.

Doubles of conventional bids are assumed to

show the suit doubled and do not need an alert if

that is the case. Many play that the double of 2®

Gordon, English Bridge and the EBU are not responsible if the information provided is incorrect or incomplete.

Stayman shows a strong hand and says nothing

about clubs - for them the double is alertable.

I CAME across a situation at my local club last night

which I would be grateful if you could clarify in

your excellent column in the EBU magazine.

One of our players was playing with a new

partner and opened 1NT with a singleton. I wasn't

at the table but I believe he held ´Txxx ™Axxx

tAJxx ®A. He and his partner had not agreed that

1NT could contain a singleton so it was just

When it became evident during the play that he

had done this, the director was called. He ruled that

no adjustment was necessary as the partner of the

1NT opener was not aware that it could contain a

singleton. However, the opponents did not think

this was correct, commenting that opening 1NT

with a singleton is illegal unless by partnership

agreement and announced as such, and that a

procedural penalty should have been imposed.

I had always understood that the situation here is

as the director had ruled, effectively 'psyching' 1NT

on this sort of hand. Please could you provide

The short answer is that you are right - although

in my opinion it's not a psyche, it's a 'deviation'.

However, since it has happened, unless they have

agreed not to do it again, I would say that they do

now have an implicit agreement and should

announce it in future. r