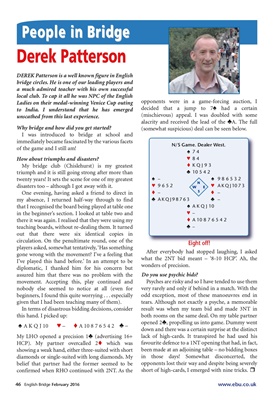 opponents were in a game-forcing auction, I

decided that a jump to 7´ had a certain

(mischievous) appeal. I was doubled with some

alacrity and received the lead of the ®A. The full

(somewhat suspicious) deal can be seen below.

DEREK Patterson is a well known figure in English

bridge circles. He is one of our leading players and

a much admired teacher with his own successful

local club. To cap it all he was NPC of the English

to India. I understand that he has emerged

unscathed from this last experience.

Why bridge and how did you get started?

I was introduced to bridge at school and

of the game and I still am!

How about triumphs and disasters?

My bridge club (Chislehurst) is my greatest

triumph and it is still going strong after more than

twenty years! It sets the scene for one of my greatest

disasters too - although I got away with it.

One evening, having asked a friend to direct in

my absence, I returned half-way through to find

that I recognised the board being played at table one

in the beginner's section. I looked at table two and

there it was again. I realised that they were using my

teaching boards, without re-dealing them. It turned

out that there were six identical copies in

circulation. On the penultimate round, one of the

players asked, somewhat tentatively, 'Has something

gone wrong with the movement? I've a feeling that

I've played this hand before.' In an attempt to be

diplomatic, I thanked him for his concern but

assured him that there was no problem with the

movement. Accepting this, play continued and

nobody else seemed to notice at all (even for

beginners, I found this quite worrying . . . especially

given that I had been teaching many of them).

this hand. I picked up:

My LHO opened a precision 1® (advertising 16+

HCP). My partner overcalled 2t which was

showing a weak hand, either three-suited with short

diamonds or single-suited with long diamonds. My

belief that partner had the former seemed to be

confirmed when RHO continued with 2NT. As the

After everybody had stopped laughing, I asked

Do you use psychic bids?

Psyches are risky and so I have tended to use them

very rarely and only if behind in a match. With the

odd exception, most of these manoeuvres end in

tears. Although not exactly a psyche, a memorable

result was when my team bid and made 3NT in

both rooms on the same deal. On my table partner

down and there was a certain surprise at the distinct

lack of high-cards. It transpired he had used his

favourite defence to a 1NT opening that had, in fact,

been made at an adjoining table - no bidding boxes

in those days! Somewhat disconcerted, the

opponents lost their way and despite being severely

short of high-cards, I emerged with nine tricks. r