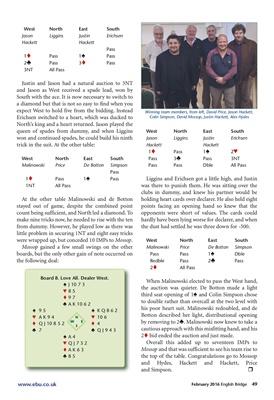 Board 8. Love All. Dealer West.

Justin and Jason had a natural auction to 3NT

and Jason as West received a spade lead, won by

South with the ace. It is now necessary to switch to

expect West to hold five from the bidding. Instead

Erichsen switched to a heart, which was ducked to

North's king and a heart returned. Jason played the

queen of spades from dummy, and when Liggins

won and continued spades, he could build his ninth

trick in the suit. At the other table:

At the other table Malinowski and de Botton

stayed out of game, despite the combined point

count being sufficient, and North led a diamond. To

make nine tricks now, he needed to rise with the ten

from dummy. However, he played low as there was

were wrapped up, but conceded 10 IMPs to Mossop.

Mossop gained a few small swings on the other

boards, but the only other gain of note occurred on

Liggins and Erichsen got a little high, and Justin

was there to punish them. He was sitting over the

clubs in dummy, and knew his partner would be

points facing an opening hand so knew that the

opponents were short of values. The cards could

hardly have been lying worse for declarer, and when

the dust had settled he was three down for -500.

When Malinowski elected to pass the West hand,

the auction was quieter. De Botton made a light

to double rather than overcall at the two level with

by removing to 2®. Malinowski now knew to take a

cautious approach with this misfitting hand, and his

2t bid ended the auction and just made.

Overall this added up to seventeen IMPs to

Mossop and that was sufficient to see his team rise to

the top of the table. Congratulations go to Mossop

and Hydes, Hackett and Hackett, Price