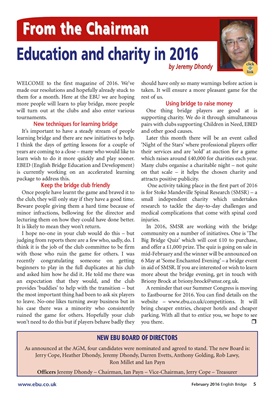 WELCOME to the first magazine of 2016. We've

made our resolutions and hopefully already stuck to

them for a month. Here at the EBU we are hoping

will turn out at the clubs and also enter various

It's important to have a steady stream of people

learning bridge and there are new initiatives to help.

I think the days of getting lessons for a couple of

years are coming to a close - many who would like to

learn wish to do it more quickly and play sooner.

is currently working on an accelerated learning

package to address this.

Once people have learnt the game and braved it to

the club, they will only stay if they have a good time.

Beware people giving them a hard time because of

minor infractions, bellowing for the director and

lecturing them on how they could have done better.

It is likely to mean they won't return.

I hope no-one in your club would do this - but

judging from reports there are a few who, sadly, do. I

with those who ruin the game for others. I was

recently congratulating someone on getting

beginners to play in the full duplicates at his club

and asked him how he did it. He told me there was

an expectation that they would, and the club

provides 'buddies' to help with the transition - but

the most important thing had been to ask six players

to leave. No-one likes turning away business but in

his case there was a minority who consistently

ruined the game for others. Hopefully your club

won't need to do this but if players behave badly they

should have only so many warnings before action is

taken. It will ensure a more pleasant game for the

rest of us. Using bridge to raise money

One thing bridge players are good at is

supporting charity. We do it through simultaneous

and other good causes.

Later this month there will be an event called

'Night of the Stars' where professional players offer

their services and are 'sold' at auction for a game

which raises around £40,000 for charities each year.

Many clubs organise a charitable night - not quite

on that scale - it helps the chosen charity and

One activity taking place in the first part of 2016

is for Stoke Mandeville Spinal Research (SMSR) - a

research to tackle the day-to-day challenges and

In 2016, SMSR are working with the bridge

community on a number of initiatives. One is 'The

Big Bridge Quiz' which will cost £10 to purchase,

mid-February and the winner will be announced on

6 May at 'Some Enchanted Evening' - a bridge event

in aid of SMSR. If you are interested or wish to learbriony.brock@smsr.org.ukridge evening, get in touch with

A reminder that our Summer Congress is moving

to Eastbourne for 2016. You can find details on the

parking. With all that to entice you, we hope to see

Education and charity in 2016by Jeremy Dhondy

NEW EBU BOARD OF DIRECTORS

As announced at the AGM, four candidates were nomi nated and agreed to stand. The new Board is: