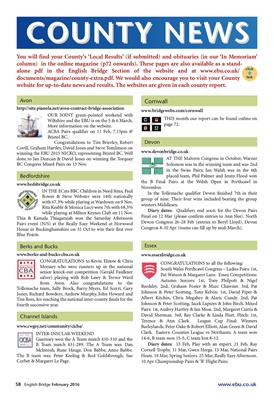 OUR JOINT green-pointed weekend with

done to Jan Duncan & David Jones on winning the Torquay

BC Congress Mixed Pairs on 13 Nov.

IN THE ECats BBC Children in Need Sims, Paul

while playing at Milton Keynes Club on 11 Nov.

Pairs event (N/S) at the Really Easy Weekend at Horwood

House in Buckinghamshire on 31 Oct to win their first ever

Mooney who were runners up in the national

from Avon. Also congratulations to the

Tim Rees, for reaching the national inter-county finals for the

The B team was: Peter Keeling & Rod Goldsbrough, Sue

THIS month our report can be found online on

AT THE Malvern Congress in October, Warner

Solomon was in the winning team and was 2nd

in the Swiss Pairs; Ian Walsh was in the 6th

the B Final Pairs at the Welsh Open in Porthcawl in

In the Tollemache qualifier Devon finished 7th in their

group of nine. Their four wins included beating the group

CONGRATULATIONS to all the following:

column) in the online magazine (p72 onwards). These pages are also available as a standalone