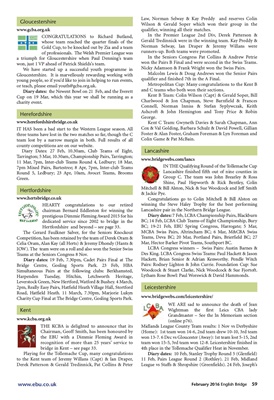 Wilson & Gerald Soper which won their group in the

qualifier, winning all their matches.

Gerald Tredinnick were in the winning team. Kay Preddy &

runners-up. Both teams were promoted.

won the Pairs B Final and were second in the Swiss Teams.

qualifier and finished 7th in the A Final.

Metropolitan Cup: Many congratulations to the Kent B

and C teams who both won their sections.

IN THE Qualifying Round of the Tollemache Cup

Lancashire finished fifth out of nine counties in

winning the Steve Haley Trophy for the best performing

WE ARE sad to announce the death of Jean

Grandmaster - See the In Memoriam section

4th place in the Tollemache Qualifier Heat in November.

whose team reached the quarter finals of the

Gold Cup, to be knocked out by Zia and a team

a triumph for Gloucestershire when Paul Denning's team

We have started up a successful youth programme in

Gloucestershire. It is marvellously rewarding working with

young people, so if you'd like to join in helping to run events,

Diary dates: the Newent Bowl on 21 Feb, and the Everett

Cup on 19 Mar, which this year we shall be running as a

IT HAS been a bad start to the Western League season. All

three teams have lost in the two matches so far, though the C

team lost by a narrow margin in both. Full results of all

HEARTY congratulations to our retired

chairman Bernard Eddleston for winning the

prestigious Dimmie Fleming Award 2015 for his

dedicated service since 2002 to bridge in the

Hertfordshire and beyond - see page 33.

The Gerard Faulkner Salver, for the Seniors Knockout

Competition, has been retained by the team of Derek Oram &

IOW). The team were on a roll and also won the Senior Swiss

Teams at the Seniors Congress 8 Nov.

THE KCBA is delighted to announce that its

Chairman, Geoff Smith, has been honoured by

the EBU with a Dimmie Fleming Award in

recognition of more than 25 years' service to

Playing for the Tollemache Cup, many congratulations

to the Kent team of Jeremy Willans (Capt) & Ian Draper,