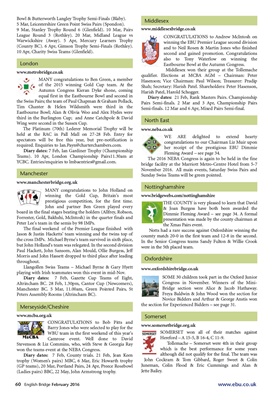 CONGRATULATIONS to Andrew McIntosh on

and to Neil Rosen & Martin Jones who finished

also to Tony Waterlow on winning the

Eastbourne Bowl at the Autumn Congress.

Middlesex won their group at the Tollemache

WE ARE delighted to extend hearty

congratulations to our Chairman Liz Muir upon

her receipt of the prestigious EBU Dimmie

bridge facility at the Marriott Metro-Centre Hotel from 5-7

THE COUNTY is very pleased to learn that David

& Joan Burgess have both been awarded the

presentation was made by the county chairman at

Notts had a rare success against Oxfordshire winning the

were in the 5th placed team.

SOME 30 children took part in the Oxford Junior

Congress in November. Winners of the MiniBridge

SOMERSET won all of their matches against

Tollemache - Somerset were 4th in their group

which is the best performance for some years

although did not qualify for the final. The team was

equal first in the Eastbourne Bowl and second in

Tim Chanter & Helen Wildsmith were third in the

third in the Burlington Cup; and Anne Catchpole & David

Wing were second in the Sussex Cup.

The Platinum (70th) Lederer Memorial Trophy will be

spectators will be free this year, but pre-notification is

MANY congratulations to John Holland on

winning the Gold Cup, Britain's most

prestigious competition, for the first time.

board in the final stages beating the holders (Allfrey, Robson,

Forrester, Gold, Bakhshi, McIntosh) in the quarter finals and

Peter Lee's team in the semis by 98 IMPs.

The final weekend of the Premier League finished with

Jason & Justin Hacketts' team winning and the twins top of

but John Holland's team was relegated. In the second division

Morris and John Hassett dropped to third place after leading

playing with Irish teammates won this event in mid-Nov.

CONGRATULATIONS to Bob Pitts and

Barry Jones who were selected to play for the

WBU team in the first weekend of this year's

won the teams event at the NEBA Congress.