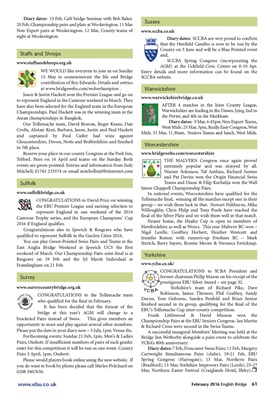 that the Henfield Candles is now to be run by the

County on 5 June and will be a Blue Pointed event

Entry details and more information can be found on the

AFTER 4 matches in the Inter County League,

Warwickshire are leading in the Dawes, lying 2nd in

the Porter, and 4th in the Markham

THE MALVERN Congress once again proved

extremely popular and was enjoyed by all.

In national events, Worcestershire have qualified for the

Tollemache final, winning all the matches except one in their

group - we wish them luck in that. Stewart Fishburne, Mike

Willoughby, Chris Philp and Tony Poole have reached the

final of the Silver Plate and we wish them well in that match.

Nearer home, the Healey Cup is open to members of

Herefordshire as well as Worcs. This year Malvern BC won -

CONGRATULATIONS to YCBA President and

former chairman Philip Mason on his receipt of the

finished second in its group, qualifying for the final of the

& Richard Cross were second in the Swiss Teams.

A successful inaugural Members' Meeting was held at the

Bridge Inn Wetherby alongside a pairs event to celebrate the

WE WOULD like everyone to join us on Sunday

15 May to commemorate the life and Bridge

Jason & Justin Hackett won the Premier League and go on

to represent England in the Cammitchellmj@btinternet.comey

have also been selected for the England team in the European

Championships. Paul Hackett was in the winning team in the

and captained by Paul Cutler had wins against

Reserve your place in our county Congress at the Park Inn,

Telford. Pairs on 16 April and teams on the Sunday. Both

events are green-pointed. Entries and information from Judy

CONGRATULATIONS to David Price on winning

the EBU Premier League and earning selection to

represent England in one weekend of the 2016

Congratulations also to Ipswich & Kesgrave who have

qualified to represent Suffolk in the Garden Cities 2016.

You can play Green-Pointed Swiss Pairs and Teams at the

weekend of March. Our Championship Pairs semi-final is at

Kesgrave on 19 Feb and the Jyl Marsh Individual at

CONGRATULATIONS to the Tollemache team

who qualified for the final in February.

It has been decided that the format of the

bridge at this year's AGM will change to a

bracketed Pairs instead of Swiss. This gives members an

opportunity to meet and play against several other members.

Pairs, Oxshott. If insufficient numbers of pairs of each gender

enter for this competition it will be run as one event. County

Please would players book online using the new website. If