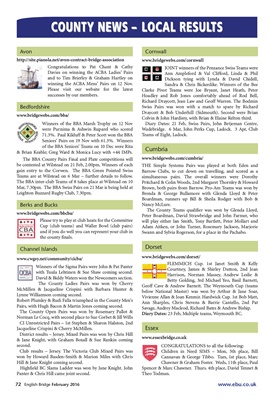 and to Tim Brierley & Graham Hartley on

successes by our members.

Winners of the BBA Marsh Trophy on 12 Nov

were Purnima & Ashwin Ruparel who scored

of the BBA Seniors' Teams on 10 Dec were Rita

The BBA County Pairs Final and Plate competitions will

gain entry to the Corwen. The BBA Green Pointed Swiss

Teams are at Wilstead on 6 Mar - further details to follow.

Please try to play at club heats for the Committee

and if you do well you can represent your club in

Winners of the Sigma Pairs were John & Pat Panter

The County Ladies Pairs was won by Cherry

The County Open Pairs was won by Rosemary Pallot &

Highfield BC Slams Ladder was won by Jane Knight. John

JOINT winners of the Penzance Swiss Teams were

Hoadley and Rob Jones comfortably ahead of Rod Bell,

Swiss Pairs was won with a match to spare by Richard

THE Simple Systems Pairs was played at both Eden and

Barrow Clubs, to cut down on travelling, and scored as a

Brown, both pairs from Barrow. Pro-Am Teams was won by

The County Teams qualifier was won by Glenda Lloyd,

will play either Ian Smith, Tony Bartlett, Peter Mollart and

Swann and Sylvia Rogerson, for a place in the Pachabo.

ALL county results, committee news and

CONGRATULATIONS to all the following:

CONGRATULATIONS to this season's winners

so far: Tricia Gilham & Richard Harris in the