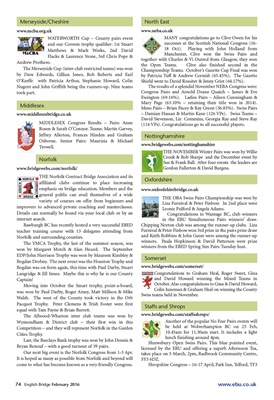 Nugent and John Griffith being the runners-up. Nine teams

THE Norfolk Contract Bridge Association and its

emphasis on bridge education. Members and the

general public can avail themselves of a wide

variety of courses on offer from beginners and

Bawburgh BC has recently hosted a very successful EBED

The YMCA Trophy, the last of the summer season, was

Bogdan Drobny. The next event was the Houston Trophy and

Bogdan was on form again, this time with Paul Darby, Stuart

Langridge & Jill Innes. Maybe this is why he is our County

Walsh. The west of the County took victory in the Orb

The Allwood-Wharton inter club teams was won by

Wymondham & District club - their first win in this

Competition - and they will represent Norfolk in the Garden

Last, the Barclays Bank trophy was won by John Dennis &

Bryan Renouf - with a good turnout of 39 pairs.

Our next big event is the Norfolk Congress from 1-3 Apr.

come to what has become known as a very friendly Congress.

MANY congratulations go to Clive Owen for his

successes at the Scottish National Congress (1618

Oct). Playing with John Holland from

together with Charles & Vi Outred from Glasgow, they won

the Open Teams. Clive also finished second in the

The results of a splendid November NEBA Congress were:

THE NOVEMBER Winter Pairs was won by Willie

Crook & Rob Sharpe and the December event by

Sue & Frank Ball. After four events the leaders are

THE OBA Swiss Pairs Championship was won by

Congratulations to Wantage BC, club winners

Chipping Norton club was among the runner-up clubs. Liza

and Keith Robbins & John Gunn were among the runner-up

and David Howard winning the Mixed Teams in

www.staffsandshrops.org.uk<mitchellmj@btinternet.compopular No Fear Pairs events will

be held at Wolverhampton BC on 25 Feb,

licensed by the EBU and offering a superb Afternoon Tea,

event for members of S&SCBA, taking place at Newcastle BC,

Enquiries & entry forms for the above events from Mrs

Wolverhampton BC will hold a Teams of Four

Competition on 15 May to celebrate the outstanding

contribution to bridge by Roy Edwards. Roy died in October

2015 after a long battle against cancer. All bridge players are

invited. Details and entry form are on the website