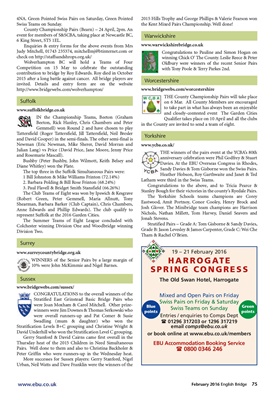 IN the Championship Teams, Beeton (Graham

Gemmell) won Round 2 and have chosen to play

and David Cooper) in the semi-finals. The other semi-final is

The top three in the Suffolk Simultaneous Pairs were:

The Club Teams of Eight was won by Ipswich & Kesgrave

Anne Edwards and Phillip Edwards). The club qualify to

represent Suffolk at the 2016 Garden Cities.

The Summer Teams of Eight League concluded with

WINNERS of the Senior Pairs by a large margin of

10% were John McKimmie and Nigel Barnes.

CONGRATULATIONS to the overall winners of the

were Jim Downes & Thomas Serkowski who

Swadling (mum & daughter) who won the

Thursday heat of the 2015 Children in Need Simultaneous

Pairs. Well done to them and also to Christina Backholer &

Peter Griffin who were runners-up in the Wednesday heat.

Urban, Neil Watts and Dave Franklin were the winners of the

Congratulations to Pauline and Simon Hogan on

Oldbury were winners of the recent Senior Pairs

on 6 Mar. All County Members are encouraged

to take part in what has always been an enjoyable

and closely-contested event The Garden Cities

Qualifier takes place on 10 April and all the clubs

in the County are invited to send a team of eight.

THE winners of the pairs event at the YCBA's 80th

Davies. At the EBU Overseas Congress in Rhodes,

Latham were third in the Swiss Teams.

Congratulations to the above, and to Tricia Pearce &

Stanley Bough for their victories in the county's Ryedale Pairs.

Mixed and Open Pairs on Friday

or book online at www.ebu.co.uk/members