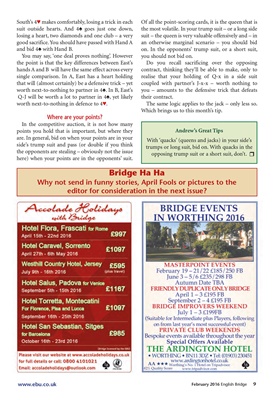 South's 4™ makes comfortably, losing a trick in each

suit outside hearts. And 4´ goes just one down,

losing a heart, two diamonds and one club - a very

good sacrifice. You should have passed with Hand A

You may say, 'one deal proves nothing'. However

the point is that the key differences between East's

hands A and B will have the same effect across every

single comparison. In A, East has a heart holding

that will (almost certainly) be a defensive trick - yet

worth next-to-nothing to partner in 4´. In B, East's

worth next-to-nothing in defence to 4™.

Where are your points?

In the competitive auction, it is not how many

points you hold that is important, but where they

are. In general, bid on when your points are in your

side's trump suit and pass (or double if you think

the opponents are stealing - obviously not the issue

here) when your points are in the opponents' suit.

Of all the point-scoring cards, it is the queen that is

the most volatile. In your trump suit - or a long side

suit - the queen is very valuable offensively and - in

an otherwise marginal scenario - you should bid

on. In the opponents' trump suit, or a short suit,

you should not bid on.

Do you recall sacrificing over the opposing

contract, thinking they'll be able to make, only to

realise that your holding of Q-x in a side suit

coupled with partner's J-x-x - worth nothing to

you - amounts to the defensive trick that defeats

The same logic applies to the jack - only less so.

Which brings us to this month's tip.

With 'quacks' (queens and jacks) in your side's

trumps or long suit, bid on. With quacks in the

Why not send in funny stories, April Fools or pictures to the

editor for consideration in the next issue?