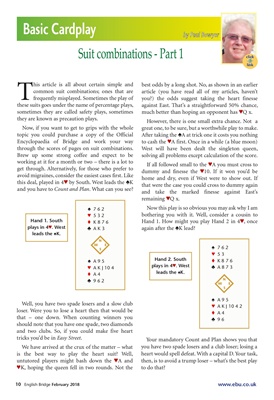 his article is all about certain simple and

common suit combinations; ones that are

frequently misplayed. Sometimes the play of

these suits goes under the name of percentage plays,

they are known as precaution plays.

Now, if you want to get to grips with the whole

topic you could purchase a copy of the Official

Encyclopaedia of Bridge and work your way

through the scores of pages on suit combinations.

Brew up some strong coffee and expect to be

get through. Alternatively, for those who prefer to

this deal, played in 4™ by South. West leads the ´K

and you have to Count and Plan. What can you see?

best odds by a long shot. No, as shown in an earlier

article (you have read all of my articles, haven't

you?) the odds suggest taking the heart finesse

against East. That's a straightforward 50% chance,

much better than hoping an opponent has ™Q x.

However, there is one small extra chance. Not a

great one, to be sure, but a worthwhile play to make.

After taking the ´A at trick one it costs you nothing

to cash the ™A first. Once in a while (a blue moon)

West will have been dealt the singleton queen,

solving all problems except calculation of the score.

If all followed small to the ™A you must cross to

home and dry, even if West were to show out. If

that were the case you could cross to dummy again

and take the marked finesse against East's

bothering you with it. Well, consider a cousin to

again after the ´K lead?

Well, you have two spade losers and a slow club

loser. Were you to lose a heart then that would be

that - one down. When counting winners you

should note that you have one spade, two diamonds

and two clubs. So, if you could make five heart

tricks you'd be in Easy Street.

We have arrived at the crux of the matter - what

is the best way to play the heart suit? Well,

™K, hoping the queen fell in two rounds. Not the

Your mandatory Count and Plan shows you that

you have two spade losers and a club loser; losing a

heart would spell defeat. With a capital D. Your task,

then, is to avoid a trump loser - what's the best play