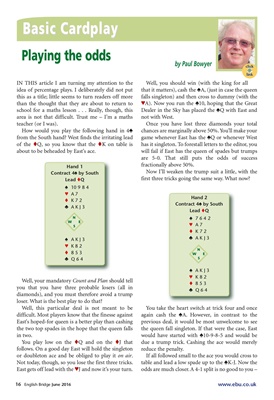 IN THIS article I am turning my attention to the

idea of percentage plays. I deliberately did not put

this as a title; little seems to turn readers off more

than the thought that they are about to return to

school for a maths lesson . . . Really, though, this

area is not that difficult. Trust me - I'm a maths

How would you play the following hand in 4´

from the South hand? West finds the irritating lead

of the tQ, so you know that the tK on table is

about to be beheaded by East's ace.

Well, your mandatory Count and Plan should tell

you that you have three probable losers (all in

diamonds), and you must therefore avoid a trump

loser. What is the best play to do that?

Well, this particular deal is not meant to be

difficult. Most players know that the finesse against

East's hoped-for queen is a better play than cashing

the two top spades in the hope that the queen falls

You play low on the tQ and on the tJ that

follows. On a good day East will hold the singleton

or doubleton ace and be obliged to play it on air.

Not today, though, so you lose the first three tricks.

East gets off lead with the ™J and now it's your turn.

Well, you should win (with the king for all

that it matters), cash the ´A, (just in case the queen

falls singleton) and then cross to dummy (with the

Dealer in the Sky has placed the ´Q with East and

Once you have lost three diamonds your total

chances are marginally above 50%. You'll make your

game whenever East has the ´Q or whenever West

has it singleton. To forestall letters to the editor, you

will fail if East has the Queen of Spades but trumps

are 5-0. That still puts the odds of success

Now I'll weaken the trump suit a little, with the

You take the heart switch at trick four and once

again cash the ´A. However, in contrast to the

previous deal, it would be most unwelcome to see

the Queen fall singleton. If that were the case, East

due a trump trick. Cashing the ace would merely

If all followed small to the ace you would cross to

table and lead a low spade up to the ´K-J. Now the

Playing the odds by Paul Bowyer