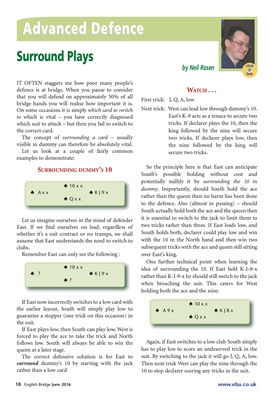 IT OFTEN staggers me how poorly many people's

defence is at bridge. When you pause to consider

that you will defend on approximately 50% of all

bridge hands you will realise how important it is.

On some occasions it is simply which card to switch

to which is vital - you have correctly diagnosed

which suit to attack - but then you fail to switch to

The concept of surrounding a card - usually

visible in dummy can therefore be absolutely vital.

Let us look at a couple of fairly common

Let us imagine ourselves in the mind of defender

East. If we find ourselves on lead, regardless of

whether it's a suit contract or no trumps, we shall

assume that East understands the need to switch to

Remember East can only see the following :

If East now incorrectly switches to a low card with

the earlier layout, South will simply play low to

guarantee a stopper (one trick on this occasion) in

If East plays low, then South can play low, West is

forced to play the ace to take the trick and North

follows low. South will always be able to win the

queen at a later stage.

The correct defensive solution is for East to

surround dummy's 10 by starting with the jack

rather than a low card.

Next trick: West can lead low through dummy's 10.

East's K-9 acts as a tenace to secure two

tricks. If declarer plays the 10, then the

king followed by the nine will secure

the nine followed by the king will

So the principle here is that East can anticipate

South's possible holding without cost and

potentially nullify it by surrounding the 10 in

rather than the queen then no harm has been done

to the defence. Also (almost in passing) - should

South actually hold both the ace and the queen then

two tricks rather than three. If East leads low, and

South holds both, declarer could play low and win

with the 10 in the North hand and then win two

subsequent tricks with the ace and queen still sitting

One further technical point when learning the

when broaching the suit. This caters for West

holding both the ace and the nine:

Again, if East switches to a low club South simply

has to play low to score an undeserved trick in the

Then next trick West can play the nine through the

10 to stop declarer scoring any tricks in the suit.