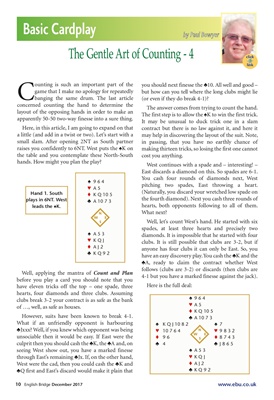 ounting is such an important part of the

game that I make no apology for repeatedly

concerned counting the hand to determine the

layout of the opposing hands in order to make an

apparently 50-50 two-way finesse into a sure thing.

Here, in this article, I am going to expand on that

a little (and add in a twist or two). Let's start with a

raises you confidently to 6NT. West puts the ♠K on

the table and you contemplate these North-South

you should next finesse the ♣10. All well and good -

but how can you tell where the long clubs might lie

The answer comes from trying to count the hand.

The first step is to allow the ♠K to win the first trick.

It may be unusual to duck trick one in a slam

contract but there is no law against it, and here it

may help in discovering the layout of the suit. Note,

in passing, that you have no earthly chance of

making thirteen tricks, so losing the first one cannot

West continues with a spade and - interesting! -

East discards a diamond on this. So spades are 6-1.

You cash four rounds of diamonds next, West

(Naturally, you discard your wretched low spade on

the fourth diamond). Next you cash three rounds of

hearts, both opponents following to all of them.

diamonds. It is impossible that he started with four

clubs. It is still possible that clubs are 3-2, but if

anyone has four clubs it can only be East. So, you

have an easy discovery play. You cash the ♣K and the

♣A, ready to claim the contract whether West

follows (clubs are 3-2) or discards (then clubs are

4-1 but you have a marked finesse against the jack).

Here is the full deal:

The Gentle Art of Counting - 4

Well, applying the mantra of Count and Plan

before you play a card you should note that you

have eleven tricks off the top - one spade, three

However, suits have been known to break 4-1.

What if an unfriendly opponent is harbouring

♣Jxxx? Well, if you knew which opponent was being

unsociable then it would be easy. If East were the

culprit then you should cash the ♣K, the ♣A and, on

seeing West show out, you have a marked finesse

through East's remaining ♣Jx. If, on the other hand,

West were the cad, then you could cash the ♣K and

♣Q first and East's discard would make it plain that