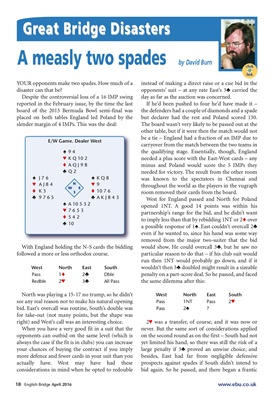 YOUR opponents make two spades. How much of a

disaster can that be?

Despite the controversial loss of a 16 IMP swing

reported in the February issue, by the time the last

board of the 2015 Bermuda Bowl semi-final was

placed on both tables England led Poland by the

slender margin of 4 IMPs. This was the deal:

With England holding the N-S cards the bidding

see any real reason not to make his natural opening

for take-out (not many points, but the shape was

right) and West's call was an interesting choice.

opponents can outbid on the same level (which is

your chances of buying the contract if you imply

more defence and fewer cards in your suit than you

actually have. West may have had these

considerations in mind when he opted to redouble

opponents' suit - at any rate East's 3® carried the

day as far as the auction was concerned.

If he'd been pushed to four he'd have made it -

the defenders had a couple of diamonds and a spade

but declarer had the rest and Poland scored 130.

The board wasn't very likely to be passed out at the

other table, but if it were then the match would not

carryover from the match between the two teams in

the qualifying stage. Essentially, though, England

needed a plus score with the East-West cards - any

minus and Poland would score the 5 IMPs they

needed for victory. The result from the other room

was known to the spectators in Chennai and

throughout the world as the players in the vugraph

room removed their cards from the board.

West for England passed and North for Poland

opened 1NT. A good 14 points was within his

partnership's range for the bid, and he didn't want

to imply less than that by rebidding 1NT or 2t over

even if he wanted to, since his hand was some way

removed from the major two-suiter that the bid

would show. He could overcall 3®, but he saw no

particular reason to do that - if his club suit would

run then 1NT would probably go down, and if it

penalty on a part-score deal. So he passed, and faced

the same dilemma after this:

2™ was a transfer, of course, and it was now or

never. But the same sort of considerations applied

on the second round as on the first - South had not

yet limited his hand, so there was still the risk of a

large penalty if 3® proved an unwise choice, and

besides, East had far from negligible defensive

prospects against spades if South didn't intend to

bid again. So he passed, and there began a frantic