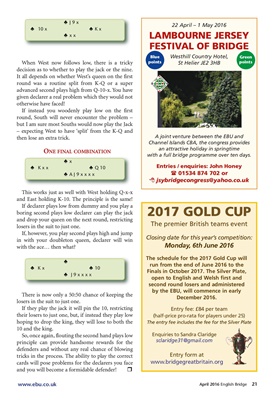 When West now follows low, there is a tricky

decision as to whether to play the jack or the nine.

It all depends on whether West's queen on the first

round was a routine split from K-Q or a super

advanced second plays high from Q-10-x. You have

given declarer a real problem which they would not

If instead you woodenly play low on the first

round, South will never encounter the problem -

but I am sure most Souths would now play the Jack

- expecting West to have 'split' from the K-Q and

then lose an extra trick.

This works just as well with West holding Q-x-x

and East holding K-10. The principle is the same!

If declarer plays low from dummy and you play a

and drop your queen on the next round, restricting

losers in the suit to just one.

If, however, you play second plays high and jump

in with your doubleton queen, declarer will win

with the ace… then what?

There is now only a 50:50 chance of keeping the

losers in the suit to just one.

If they play the jack it will pin the 10, restricting

their losers to just one, but, if instead they play low

hoping to drop the king, they will lose to both the

So, once again, flouting the second hand plays low

principle can provide handsome rewards for the

defenders and without any real chance of blowing

tricks in the process. The ability to play the correct

cards will pose problems for the declarers you face

and you will become a formidable defender! r

A joint venture between the EBU and

an attractive holiday in springtime

with a full bridge programme over tejsybridgecongress@yahoo.co.ukries: John Honey

Closing date for this year's competition:

The schedule for the 2017 Gold Cup will

Finals in October 2017. The Silver Plate,

open to English and Welsh first and

second round losers and administered

by the EBU, will commence in early

The entry fee includes the fee for the Silver Plate