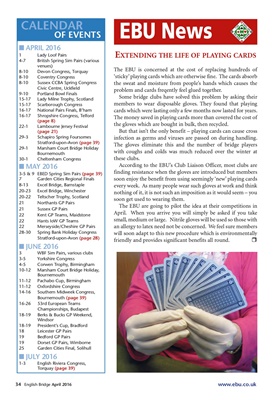 EXTENDING THE LIFE OF PLAYING CARDS

The EBU is concerned at the cost of replacing hundreds of

'sticky' playing cards which are otherwise fine. The cards absorb

the sweat and moisture from people's hands which causes the

Some bridge clubs have solved this problem by asking their

members to wear disposable gloves. They found that playing

cards which were lasting only a few months now lasted for years.

the gloves which are bought in bulk, then recycled.

But that isn't the only benefit - playing cards can cause cross

infection as germs and viruses are passed on during handling.

The gloves eliminate this and the number of bridge players

with coughs and colds was much reduced over the winter at

According to the EBU's Club Liaison Officer, most clubs are

finding resistance when the gloves are introduced but members

every week. As many people wear such gloves at work and think

nothing of it, it is not such an imposition as it would seem - you

soon get used to wearing them.

April. When you arrive you will simply be asked if you take

small, medium or large. Nitrile gloves will be used so those with

an allergy to latex need not be concerned. We feel sure members

will soon adapt to this new procedure which is environmentally

friendly and provides significant benefits all round. r