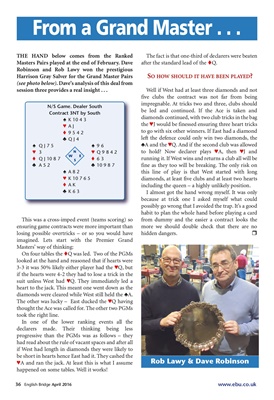 THE HAND below comes from the Ranked

Masters Pairs played at the end of February. Dave

(see photo below). Dave's analysis of this deal from

This was a cross-imped event (teams scoring) so

losing possible overtricks - or so you would have

On four tables the tQ was led. Two of the PGMs

looked at the hand and reasoned that if hearts were

suit unless West had ™Q. They immediately led a

heart to the jack. This meant one went down as the

diamonds were cleared while West still held the ®A.

The other was lucky - East ducked the ™Q having

thought the Ace was called for. The other two PGMs

In one of the lower ranking events all the

declarers made. Their thinking being less

progressive than the PGMs was as follows - they

had read about the rule of vacant spaces and after all

if West had length in diamonds they were likely to

be short in hearts hence East had it. They cashed the

™A and ran the jack. At least this is what I assume

happened on some tables. Well it works!

The fact is that one-third of declarers were beaten

after the standard lead of the tQ.

SO HOW SHOULD IT HAVE BEEN PLAYED?

Well if West had at least three diamonds and not

five clubs the contract was not far from being

impregnable. At tricks two and three, clubs should

be led and continued. If the Ace is taken and

diamonds continued, with two club tricks in the bag

the ™J would be finessed ensuring three heart tricks

to go with six other winners. If East had a diamond

left the defence could only win two diamonds, the

®A and the ™Q. And if the second club was allowed

to hold? Now declarer plays ™A, then ™J and

running it. If West wins and returns a club all will be

fine as they too will be breaking. The only risk on

this line of play is that West started with long

diamonds, at least five clubs and at least two hearts

including the queen - a highly unlikely position.

I almost got the hand wrong myself. It was only

because at trick one I asked myself what could

possibly go wrong that I avoided the trap. It's a good

habit to plan the whole hand before playing a card

from dummy and the easier a contract looks the

more we should double check that there are no